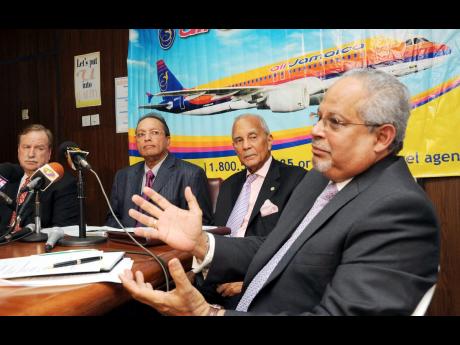 Trinidad-owned Caribbean Airlines has revealed that it intends to hire about 1,000 people from the total workforce currently employed to Air Jamaica.

Such a move should come as a relief to many workers, as it had been speculated within their ranks and publicly that only around 300 people would be placed on the new payroll.

At the same time, Air Jamaica's divestment team has given the assurance that the airline's more than 1,500 employees will receive their full redundancy pay and severance monies tomorrow, when Government operates its final flight.

Yesterday, Air Jamaica workers stayed off the job for hours, resulting in travel disruptions at the Norman Manley and Sangster international airports, as well as for Air Jamaica flights in the United States.

As the strike was taking place, Air Jamaica CEO Bruce Nobles told journalists at a press conference that the management of the

airline had communicated with the workers' representatives and the issues had been worked out.

Government is transferring the responsibility of operating Air Jamaica's routes to Caribbean Airlines.

Dennis Lalor, chairman of the Air Jamaica divestment team, said during the press conference held at Air Jamaica's offices on Harbour Street, downtown Kingston, that the contracts allowing for the agreements would be signed by tomorrow.

Lalor also said all workers would be paid severance pay on the last day of the company's operations, and that plans were afoot for Air Jamaica to pay over outstanding statutory deductions to the National Housing Trust and the National Insurance Scheme.

Air Jamaica has not paid over statutory deductions since 2008.

The Jamaican Government was seeking to sell the airline but was unable to secure a buyer. Under the lease agreement with Caribbean Airlines, Jamaica will receive a 16 per cent share in the company, which is a measure of Air Jamaica's brand - estimated at US$30 million.

Under the arrangement, details of which are covered by a confidentiality clause, Jamaica will spend $22.5 billion for the winding up of Air Jamaica's operations. The country will also assume all debts associated with the failed national carrier.

Jamaica, however, will remain the owner of all of Air Jamaica's other assets, including real estate.

He added: "If the marriage is terminated for any reason, the Government would then have to seek airlift from other carriers, unless a government in the future decides it wants to get back into the airline business."

Dr Shafeek Sultan-Kahn, director of the board of Caribbean Airlines, said his company was hoping for a seamless transition.

Persons employed to the transition company are to be offered three-month and six-month contracts with options to renew.