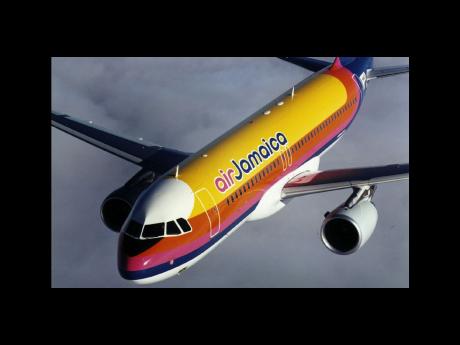 National carrier would have turned 44 today

"We planned it that way with you in mind," the 1968 advertising poster said. "That's why ... to Miami ... we leave Kingston at 6 p.m. just before sunset, after the rush and business of the day.

"In just over two marvellous jet hours via Montego Bay, you're in Miami. On your next trip to Miami, make it the best time ... AIR JAMAICA."

It was May 2, 1966, and a Gleaner article reported that Jamaica was taking its place among the "airline-operating nations of the world".

Air Jamaica started off with two routes, serving passengers travelling between the United States of America and the Caribbean island, which was carving out a tourism niche.

Three flights, one coming in from New York, and two taking off for Miami, heralded the airline's start.

"Gleaming blue and white plane steps marked 'Air Jamaica' were wheeled out on the ramp and over the public address system the name 'Air Jamaica' took pride of place as passengers were called for its flight."

An all-Jamaican crew that took the first 'Sunjet' plane, carrying 102 passengers, into the skies was made up of Captain Herbert Steele, Captain Michael Guilfoyle and Captain John Purchas.

The year of Jamaica's independence, 1962, brought a realisation with it, where the Jamaican Government acknowledged the growing demand for a national flag carrier. The Government also knew that Jamaica was not ready to compete in a market where other well-established airlines existed.

The BWIA and BOAC agreement with the Government was meant to give the fledgling airline the push it needed at the starting line.

The agreement was also monitored closely, as Air Jamaica waited for the right moment to leave the nest on its own. Air Jamaica made a profit in its first 18 months, and so the Government linked with Air Canada.

The Canadian airline agreed to provide training and technical and financial assistance as it helped with the creation of a self-contained airline.

Fashion shows, Jamaican dishes served with Jamaican rum and the famous Red Stripe were the special features one could experience on the DC-8 or DC-9 planes flying to New York and Miami, respectively.

The Story of Air Jamaica, published in 1969, pointed out that Air Jamaica intended to be "a Jamaican airline for the Jamaican people".

With today marking the 44th anniversary of Air Jamaica's inaugural flight and its current transition, Jamaicans can reflect on the story of Air Jamaica, as it was told in 1969:

"It is the national airline and (Air Jamaica Limited) would like to think that the Jamaican people will travel Air Jamaica not only out of a deep sense of loyalty but because they are proud of their own and believe in the island's future."