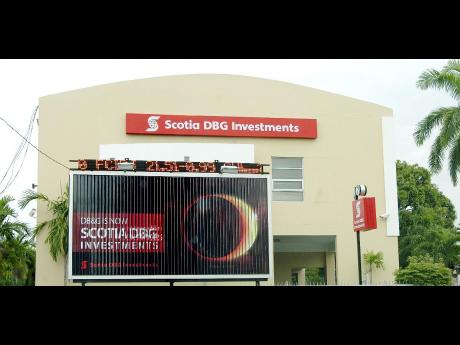 Scotiabank Jamaica, which bought the business for J$879 million in cash, will merge Scotia DBG Merchant Bank (SDBGMB) into the commercial banking operation.

The price was based on an independent valuation of SDBGMB by Deloitte Touche Tohmatsu, the bank said. The transaction was also overseen by a committee comprising independent members of the Scotia DBG board of directors, including Phillip Martin, Angela Fowler and Dr Anna Law; and the deal approved by the Bank of Jamaica, Financial Services Commission and the Ministry of Finance.

Both Scotiabank and Scotia DBG are subsidiaries of Scotia Group Jamaica Limited, the umbrella operation for the Canadian-owned banking group's domestic assets.

Scotia Group said the merger was meant to remove duplication of products.

The deal closed May 3, but the consolidation will take another three months to the end of July.

The banking group did not disclose the value of the company, but as at December 2009, SDBGMB managed assets totaling J$4.7 billion, inclusive of a J$1.9 billion loan portfolio.

The deal has further narrowed the merchant banking sector, from three players to two - leaving Capital and Credit Merchant Bank and MF&G Trust - and from total assets of J$33.4 billion to J$28.7 billion, according to central bank data.

"We feel that this transaction is in the best interest of all our stakeholders. Both Scotiabank and SDBGMB offer similar products and services and, therefore, we felt it was a natural step to consolidate the two so as to gain efficiencies while offering our customers greater convenience based on Scotiabank's wider distribution model," said Bruce Bowen, president and chief executive officer of Scotia Group in a company statement issued on Monday.

The bank said duplications were seen in all of the bank's loan and deposit products. The merchant bank. which operates from a sole branch out of New Kingston, has 700 deposit and over 200 loan accounts.

Customers will not immediately see any change to the service currently being offered, Scotiabank said.

"Customers of the merchant bank will be contacted by a customer service representative to ascertain which branch of BNSJ they would like to transfer their deposit account. Most loan products will be managed by the Corporate & Commercial Business Centre (CCBC) at BNSJ or the main Scotia Centre branch," said Anya Schnoor chief executive officer of SDBG and executive vice president of Scotia Group via email to Wednesday Business.

The merchant bank has less than 12 full-time staff, according to Schnoor, who said efforts would be made to redeploy personnel to other areas of the group where vacancies exist, as per group policy, but did not promise there would be no displacement.