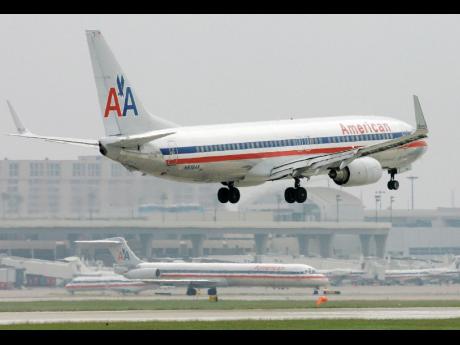 The American Airlines (AA) seat-guarantee deal signed by the Government in 2008 will cost less than feared by its critics but much more than was anticipated by Tourism Minister Edmund Bartlett.

Under the one-year deal, which ended last November, the Government had set aside US$4.5 million to pay AA if it flew into Jamaica with less than 75 per cent of bottoms to seats for each flight.

However, with the accounts now tallied, it has been determined that Jamaica owes AA US$1.4 million (J$123.2 million).

That is less than 50 per cent of the amount the critics of the deal had argued that the Government ran the risk of paying at a time when the then national airline was struggling and in need of cash.

But an optimistic Bartlett had dismissed detractors while arguing that the Government could finish the year without needing to pay a single US dollar.

"It is not that it would help Air Jamaica's cash flow, as we will not be paying the money every quarter or every month.

"This is a contingent guarantee that will only be paid if you don't meet the agreed load factor at the end of the period," Bartlett told The Gleaner at the time.

However, Information Minister Daryl Vaz told the weekly post-Cabinet media briefing yesterday that having already paid US$361,000, the Cabinet has approved funds to cover the remainder of the bill.

Vaz also announced that the Government had decided to enter a similar deal - running from June 2010 to August 2011 - with US Airways. However, this time around, the Cabinet has decided that Jamaica Vacations should pay no more than US$1 million.

The tourism minister had argued that with nearly 3,000 new hotel rooms, the AA deal provided the seat security that the country needed at a time when other airlines were reducing the number of flights to Caribbean destinations.