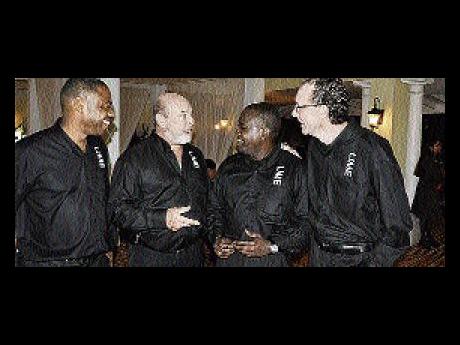 Representatives of LIME Jamaica are seen here conversing during a cocktail reception in Montego Bay hosted by the company to reaffirm its commitment to the city. From left are Steve James, head of western sales; new board member, Mark Kerr-Jarrett; vice-president Edward Gabbidon and Geoff Houston, country manager for LIME in Jamaica and Cayman. The reception was held at Half Moon hotel, last Thursday.- Janet Silvera Photo

LIME Jamaica will be pumping US$35-40 million into upgrading its mobile network in Montego Bay, a plan that will extend 3G coverage to the city, country manager Geoff Houston announced Thursday.

At a cocktail reception hosted at Half Moon by LIME Jamaica, Houston said that 2010 is the year for Montego Bay .

To press his point, Houston introduced former president of the Montego Bay Chamber of Commerce and Industry (MBCCI), landowner and businessman Mark Kerr-Jarrett, as one of the company's new board members.

"We are making huge investments in upgrading all our networks in the west, rolling out 3G, more broadband and more fixed lines by Christmas," Houston later told Sunday Business.

The network, which converts to a more than $3 billion investment, will be built by Ericsson, with the needed equipment already ordered, Houston said.

LIME's new commitment to Montego Bay includes the opening of a flagship store at the Fairview Shopping Centre on the weekend.

The zest being shown by LIME in the Second City has been welcomed and lauded by Kerr-Jarrett, who said it demonstrates the company's commitment to its clients.

"LIME has realised that Montego Bay is playing and will continue to play a more important role in Jamaica's economic deve-lopment, in which ICT and financial services will play a key part, both of which depend heavily on a modern and efficient telecommunications network," he said.