'For Kicks' gets thumbs up at BT 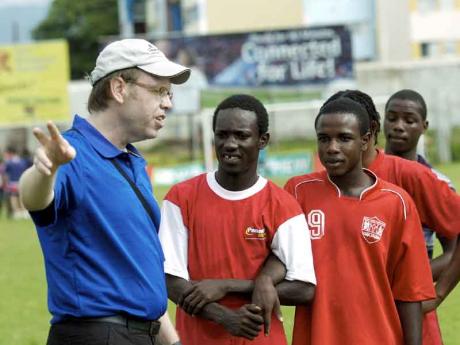 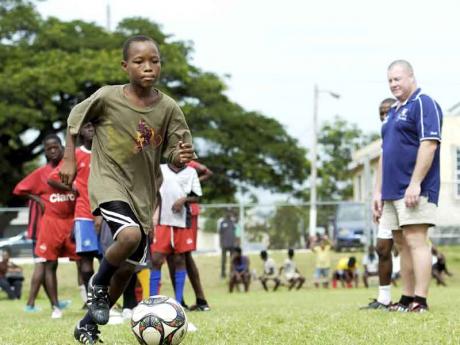 Despite the threat of then Tropical Storm Tomas, Canadian volunteers from the 'For Kicks' programme and youths from Boys' Town and surrounding areas gathered at the Boys' Town Football Club for friendly games and training.

"The idea is that some of these kids (Canadians) come from affluent areas, that's why I brought some of them so they can really see what it's like in the world and know reality. Some of our communities have beautiful homes, beautiful things, they have everything available to them," Sergeant Steve Hicks of the Toronto Police Services told The Gleaner, when asked about the aims of the programme. Hicks is also the chairman and founder of the programme.

He said that one of the main reasons for beginning the initiative was the need to find solutions to the problem of a large number of Jamaican emigrants who have become involved in criminal activities. It is hoped that by conducting programmes such as these, in collaboration with the Citizen Security and Justice Programme (CSJP), which runs a similar programme - 'Goals For Life' - the original reasons that led them to turn to crime could be identified and prevented.

'For Kicks' has been an active programme in Canadian communities for seven years and they came to Jamaica for the first time in 2008 and conducted several football clinics. Hicks identified football as the medium through which life skills could be carried across.

"We like to bring those components in and teach them everything about life so that they're fully familiar with everything they need to know," he added, referring to social skills associated with education, jobs and family life.

Those taking part in the clinic at Boys' Town seemed to be enjoying themselves, dribbling balls between cones and practising goalscoring.

"They're really like friendly and welcoming and stuff. In Canada, you'd have to like, go and talk to them, but here they come to you," said Celie Beal of Courtice, Ontario, showing that she was enjoying the football itself, as well as the social interactions in unfamiliar surroundings, which are entirely different in nature from what she and others are accustomed to.

"The experience is really eye-opening, seeing what it's like in a different country, how the communities are different, how the soccer is different and how we can relate," she pointed out.

Ryan Porter of Wilton Gardens (Rema), who has been playing for Boys' Town for four years, was evidently enthusiastic about the programme.

"This is a great experience for the youngsters, they must come to join it. It's a perfect programme so far," he told The Gleaner.

Hicks identified the fact that the programme allows for those in the communities they visit to get a chance to play formally, while about 60 per cent of the community would not normally have the chance or available funds to play club football.

He pointed to the fact that despite the challenged surroundings, the football facilities were well kept, providing for the youths a haven of sorts that ought to be used to its full potential.