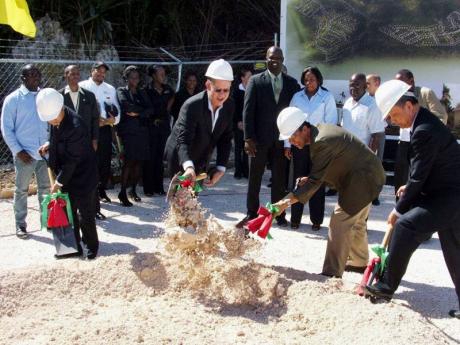 PRIME MINISTER Bruce Golding broke ground on Wednesday in Runaway Bay, for the construction of the St Ann cluster of 2,626 housing solutions, aimed at easing the accommodation plight mainly of workers in the tourism industry.

The J$4.74b project, funded by the EXIM Bank of China, will see new housing solutions being provided in the Belle Air and Mount Edgecombe areas of Runaway Bay.

The project, dubbed the "Economical Housing Project of Jamaica," is part of an overall plan that also includes the construction of 828 housing solutions in Luana Gardens in St Elizabeth, at a cost of J$1.65B.

At the same time, Golding defended the use of Chinese workers on the project, citing two reasons why he supported them.

"There has been criticism, from time to time, that too many Chinese workers are involved in these projects - let me just put it plain and blunt to you," Golding said.

"China exports labour. China have over a billion people and there is no way that China can have enough projects going on in China to employ all of them, so what China does is that, they provide the funding that they want to us and insist not only because they have workers that need to be employed, but also because they have to ensure that the quality of the standard of work meets their own requirement,".

He continued: "So that they insist on having a number of their workers here. I am not objecting to that."

Golding said through all of this he wants to see the transfer of technology and Jamaicans learning from the Chinese how they do things.

He added: "There is a second reason why it is so important to have them here. Remember that lady on Mrs Gloudon programme that seh one Chiney can do five smaddy work? And some of us snicker at that. Nutten nuh wrong with dat."

Chinese Ambassador to Jamaica, His Excellency Chen Jinghua, said the project would provide employment opportunities for 500 persons during the construction period but it was unclear how many Jamaicans would be employed.

The Ambassador said China is always willing to share experience in development with other developing countries and provide help as its capacity allows.

"I believe the Economic Housing Project of Jamaica is not only a project, but also another bond of friendship between China and Jamaica," he said.

The major work to be done include sewage and water infrastructure, remedial drainage works and road rehabilitation.

The work will be undertaken by the China National Complete Plant Import and Export Corporation.

Minister of Housing and Water, Dr Horace Chang, said the government was focused on providing housing solutions to workers in the tourism sector, not just hotel workers. He said over the years lack of access to housing solutions by workers in this sector has resulted in major development of informal settlers along the north coast.

The Housing Agency of Jamaica under the Ministry of Water and Housing is managing the project.