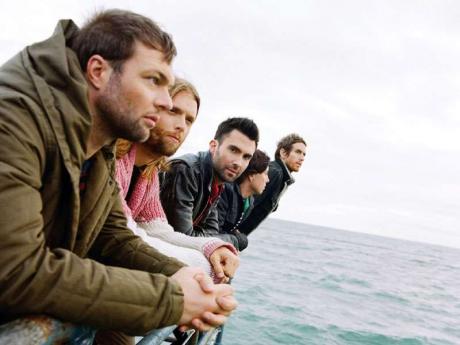 Members of Maroon 5 look out over the ocean in this picture that makes up the rear cover of one of the group's albums.- Contributed

One lucky patron will get the once-in-a-lifetime opportunity to win two silver access tickets to attend the Jamaica Jazz and Blues Festival on Friday, January 28 at the Trelawny Multi-purpose Stadium. There the ticket winner and a guest will get to see American rock band Maroon 5 up close and personal.

Organisers of the Jamaica Jazz and Blues Festival have decided to engage their many fans using social media networks Facebook and Twitter where persons can log on for a chance to win the lucky prize of tickets for the mega show.

The lucky patron will also get the opportunity to meet the multi-Grammy Award winning band, who will be making their debut at the festival.

Maroon 5 have released two multi-platinum studio albums namely 2002's Songs About Jane and 2007's It Won't Be Soon Before Long. The band has also scored a string of hit singles, This Love, She Will Be Loved, Harder to Breathe, Sunday Morning, and Makes Me Wonder. The Los Angeles quintet, who recently released their third studio album, Hands All Over, have won three Grammy Awards, and sold 15 million albums around the world.

According to marketing director for Jamaica Jazz and Blues Festival, Marcia McDonough, the organisers are moving to get the word out quickly about the festival which is in its 15th year. "We all know that social media nowadays is the way to go in getting info out quickly to the public, and so we have decided that we will use Facebook and Twitter to launch our sweepstakes, where fans can get a chance to win tickets to see Maroon 5 live."

McDonough added that persons can also visit the event website at www.jamaicajazzandblues.com to sign up for a chance to win the exclusive tickets. Only persons 18 and over can enter, however McDonough emphasised that spreading the word about the event is the main aim. "We want to get the festival viral not only for locals but we also want to tap into our international fans so they can also get the opportunity to win tickets to see Maroon 5 and many other international acts perform."

The event series, which is dubbed "The Art of Music" will also feature Detroit-based multi-platinum selling R&B trio SWV who conjured up hits such as I'm So Into You, Right Here, Weak and Anything.

Also down to rock the thousands of patrons expected at the Greenfield Stadium is Jamaica's very own, overseas-based songstress, Diana King, who will be strumming up past hits such as Shy Guy, Luv Triangle and Summer Breezin'.

Another of the overseas acts that will be debuting at this year's Jamaica Jazz and Blues Festival is R&B singer Laura Izibor who has been described as the modern day Aretha Franklin.

The 22-year-old Dublin-born singer dubbed "The Soul of Ireland" will be dropping hits such as Shine, If Tonight is My Last, and Mmm.

The Jamaica Jazz and Blues Festival main concert nights take place from January 23 to 29 with the support of sponsors Heineken, Johnny Walker, Baileys, Flow, and the Jamaica Tourist Board.

Started in 1996 by the national airline, Air Jamaica, in association with the Jamaica Tourist Board and several other business entities, the Jamaica Jazz & Blues Festival has grown over the years and is now a favourite on the calendar of not only Jamaicans but from persons all over the world.

Boasting in excess of 25,000 patrons annually, the event has now been expanded to a week-long event benefiting the resort regions of Montego Bay and Ocho Rios.