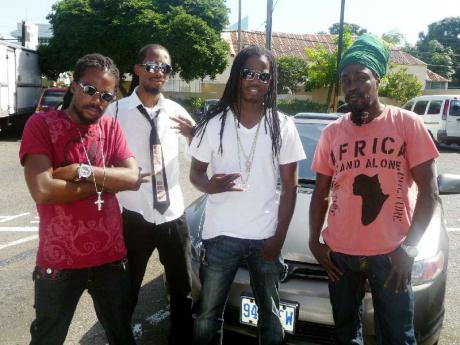 Members of the One Blood family, (from left) Andrew Blood, Bomb A Drop, Wada Blood and Junior Reid. - Photo by Hasani Walters

In a show of love and support for the Japanese community after last Friday's earthquake and tsunami devastated sections of the country, Junior Reid and his One Blood family have come together to raise funds to be sent to Japan in aid of those affected by the disasters.

Funds will be raised from the proceeds of last and next week's instalment of his weekly Japanese Thursdays event, held at Club View on Eastwood Park Road.

The Japan disasters occurred on the second staging of Japanese Thursdays and Reid has now opted to partner with Yumi (a Japanese native who frequents the club) to contribute proceeds to the country.

This is not the first time the group is donating to natural disaster funds, as they have been constant contributors to Haiti since a 7.0-magnitude earthquake hit last January.

Reid spoke to The Sunday Gleaner saying that Japan was a nation that gives much support to reggae and dancehall music, and that his act of generosity was simply a medium of returning love and support. According to Reid, there have been countless occasions when persons from Japan have done much for Jamaicans.

In a recent interview with The Gleaner, Reid had said, "As foreigners, you don't have no one else in the world who come to Jamaica to get involved in music like Japan. Nuh American, nuh Englishman can compare to them when it come to musical relations to Jamaica. Wi want them to know that the One Blood family respect, and love goes out to them. They support our music, so we affi support them."

Reid and sons, Andrew and Wada, have also released their first music video since the start of the year for their songs Nah Bow Fi Money and Roll Wid Mi Bredda on Notice Productions' Currant rhythm.

After only two weeks, the video has attracted over 54,000 views on popular hip-hop website worldstarhiphop.com.

Reid said it was only natural for the video to be popular because many members of the hip-hop community respect his work.

He also said that since the video's release he had received numerous telephone calls from overseas querying about the two 'new' artistes in the video. Some of those queries have even lead to requests for collaborations.

When he tells them that they are his sons, some are left in disbelief.

The video, which was shot in areas across Kingston and St Andrew such as Half-Way Tree, Cassia Park, at the One Blood Plaza and in Waterhouse, was given extra mileage because it was directed by Duke, an overseas-based director.

For the remainder of 2011, The One Blood family all echoed similar comments that their main focus is on good, quality music.

Bomb A Drop, one of the young artistes in the camp, will also be aiming to make a name for himself this year.