The train is coming, so get on board! 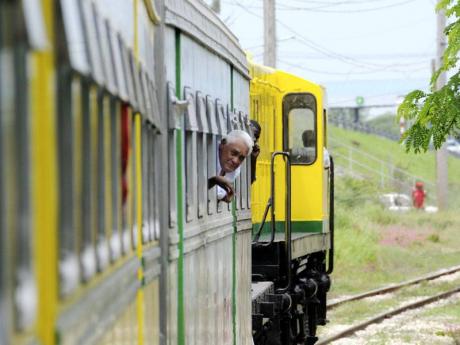 Mike Henry, minister of transport and works, enjoys the train ride from May Pen to Linstead on Saturday. It was a test run for the resumption of the much-anticipated rail service in Jamaica. The train will start rolling again on the leg from May Pen to Spanish Town, Bog Walk and Linstead soon. 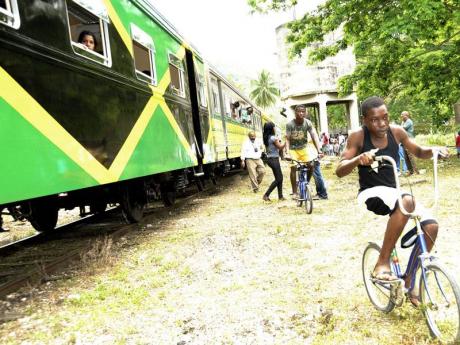 This boy rides his bicylce after getting a view of the train. 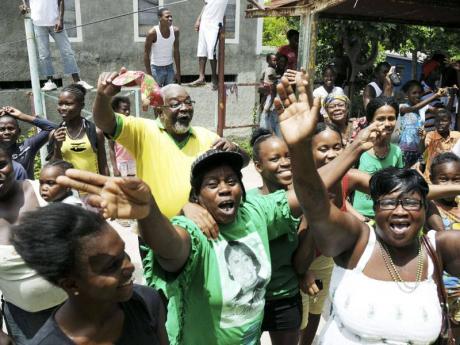 Residents celebrate on Saturday as the passenger train rolls by their community. - photos by Gladstone Taylor/ Photographer 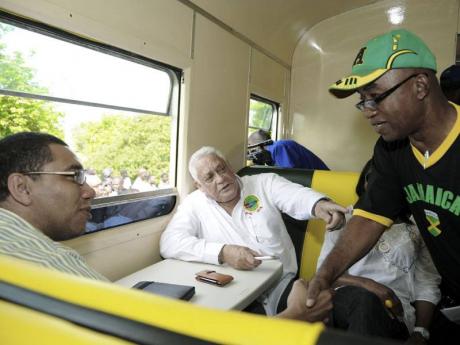 Mayor of May Pen, Milton Brown (right), in discussion with Ministers Andrew Holness (left) and Mike Henry on the passenger train which was on a test run on Saturday.
1
2
3
4

THE EXCITEMENT was unmistakable among the hundreds sharing in the historical moment. The morning of April 16, 2011, will not be forgotten anytime soon. The tooting horn signalled the grand return of the passenger train service to Jamaica, as it rolled into the May Pen station at 9:30 a.m. for the first time in 19 years.

Adorned in the Jamaican colours, hundreds gathered to bask in the moment.

"Yes, finally. After 19 years, mi glad fi see it come back. You know how long me a wait pon dis!" one woman shouted from within the crowd.

Government ministers Mike Henry, Olivia Grange and Andrew Holness, along with chairman of the Jamaica Railway Corporation, Barry Bonitto, headed the list of dignitaries and invited guests for the commemorative launch and test run of the welcome addition to the transportation system.

Combing the lush countryside of the inlands of Jamaica, going through dark tunnels, mountains and over deep precipice, the train creaked its rejuvenated old bones with its special guests on board as it rolled from May Pen to Linstead, making stops in Old Harbour, Spanish Town and Bog Walk.

Hundreds of persons lined the route, waving and screaming. Their enthusiasm was obvious as they created a carnival-like atmosphere in their town. Many became unofficial photographers and videographers as they wanted their own personal memories of this day.

Eighty-four-year-old Ludgar Parish took the ride with his 11-year-old son, Nicholas, to share with him the experience, memories coming back of his childhood days riding the train.

"It is an excellent idea, they never should have stopped it in the first place. It's a shame we didn't improve on it and maintain it. But now that it is back I hope we will only improve on it," Parish told The Gleaner.

"I will use it whenever I can, because I think it will be safer and less expensive. I think every modern city should have a railway connecting the docks to the main towns. As a farmer, I know it is much easier to use the train to get my goods around."

As the train screeched to the end of its long overdue journey, one passenger declared, "Yow, mi feel proud. Mi feel like me waan cry."

In proclaiming the train service officially reopened, Minister of Transport and Works Mike Henry said the Government would be continuing the rebuilding process of the railways as the rebirth of the train service returns to Jamaica.

Following Saturday's test run, the train service is expected to be fully operational within a month, after all the kinks have been worked out. It will run from May Pen to Linstead, making stops in Old Harbour, Spanish Town, and Bog Walk.

The fare stage has also not been finalised, which will range from students, regular, first and second class. The six-coach train will be able to seat approximately 400 passengers.

The train service began operations in Jamaica 166 years ago, in 1845. Following several changes, it was completely shut down in 1992.