St Catherine's 'Eighth Wonder of the World' going to waste 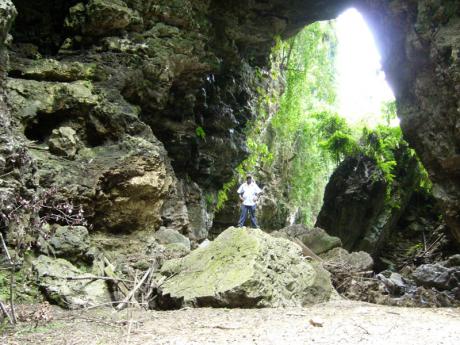 Quincy Mignott, part-owner of the family property on which Natural Bridge is located in Riversdale, St Catherine, stands on a huge boulder under the bridge. - Photos by Paul H. Williams 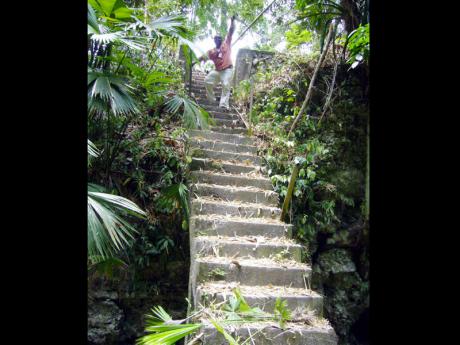 Paul H. Williams raises his hand in victory after returning from the riverbed at Natural Bridge on Tuesday, May 3. - Contributed 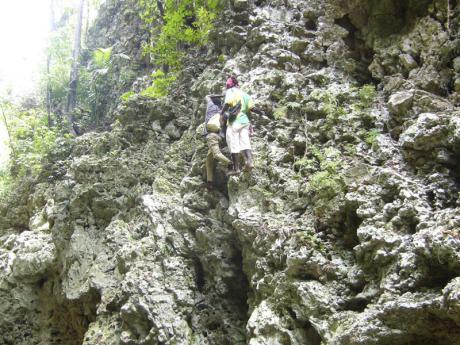 Two youths, Dwayne Lamont and Omar Harris, walk on the side of one of the jagged limestone cliffs near Natural Bridge. 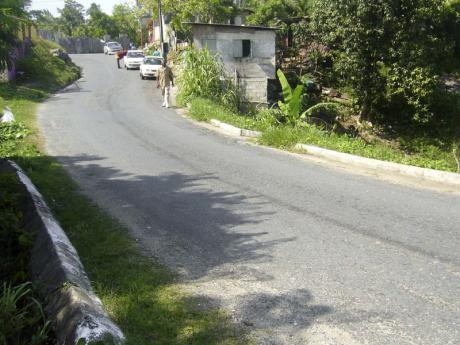 The road that runs over Natural Bridge at Riversdale in St Catherine.
1
2
3
4

TO THE uninformed, it's just another roadway. To members of the community, it is just there. To visitors, it is billed as the 'Eighth Wonder of the World'. To nature lovers, it is an awesome piece of natural formation, a bridge that crosses a deep limestone ravine. It consists of many layers of rock attached to two steep limestone cliffs.

Located in the heart of Riversdale, St Catherine, this natural bridge hangs about 60 feet above one of the tributaries that flow into the Rio Cobre. The river runs through a wide arch, the top of which is the bridge. This geological wonder seems to have been created by the dissolution of limestone. The karst scenery within the valley testifies to this. Huge layered boulders in the riverbed directly under the bridge obviously had fallen from it over time.

To see the grandeur of it all you will have to travel down 125 steps to the edge, and another 30 into the riverbed. The experience can be overwhelming with the jagged cliffs rising several feet into the air. On one side, there are interconnected caves, inhabited by bats. When The Gleaner visited recently, the water level was low, but Quince Mignott, who oversees the family property, said there were times when the entire riverbed was covered. He pointed to section of soft dirt that used to be a pool in which he swam when he was a youth.

The property has been in Mignott's family for years, passing from his grandfather to his mother and then to him and his relatives. The graves of some of his relatives are on the hillside leading to the riverbed. The property, according to his grandfather's wishes, is not to be sold. But, Mignott wants to lease it to have it transformed into a must-see nature spot for locals and visitors.

"Mi well want to see a man develop it to generate some employment in the place," he told The Gleaner.

The Jamaica Labour Party administration of the 1980s, Mignott said, had put in some infrastructure including the concrete steps and a restroom, but after it lost the 1989 general election, the project was abandoned. The metal rails from the steps have been stolen, and the restroom is now derelict. Years ago, he was approached by a certain People's National Party politician to lease the site, but Mignott was not pleased with aspects of the offer. He doesn't have the money to do the development, so he would welcome any intervention from the Government or private interests.

In 2008, he had written Tourism Minister Ed Bartlett about the matter. In a letter dated 30th June, 2008, Bartlett responded. He said, inter alia: "As a first step, I have asked a representative of the Tourism Product Development Company (TPDCo) to visit your site and to make an assessment and prepare a report. Please expect to receive a call from Ms Sandy Chung of TPDCo, who will advise you about the name of the representative and the date and time of the visit."

Sandy Chung wrote Mignott shortly afterwards. She said in a July 14, 2008 letter, "It was a pleasure speaking with you on July 10, 2008. As I explained to you and to your daughter, we would not be able to undertake this site visit before October 2008 and you agreed to this. We look forward to visiting the site in the future."

Well, the future is yet to come, and the site, with a potential to earn foreign currency for the country and to offer employment to the many idle youths in the community, is now strewn with man-made garbage. "The world at large is missing one of the greatest handiwork of the Almighty," Mignott declared in frustration, "This is wasting!"