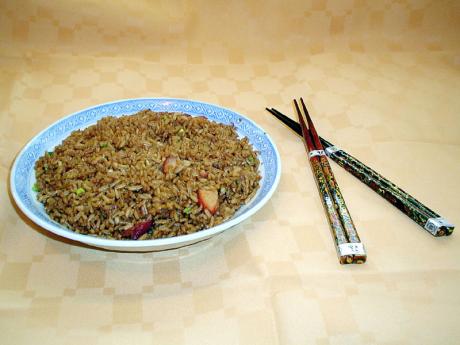 The following article is part of a series prepared by the Jamaica China Friendship Association.

When the Chinese first came to Jamaica, they were forced to improvise and make do with the foodstuff they were able to find here, as the supplies that they were promised from China were very seldom given, if at all. They were later able to import the necessities, but supplies were again scarce during World Wars I and II, so improvisation and adaptation were required. For instance, in the 1940s, Jamaican tamarind was substituted for the Chinese sour plums which are extremely important in the preparation of a popular Chinese duck dish.

The cuisine of the Chinese in Jamaica became a blend of available produce and Chinese favourites. Some of these combinations, so desirable and delicious, have remained in existence up to today.

Chinese food is now a favourite in Jamaica, as can be seen from the large number of thriving Chinese restaurants here. Jamaicans who have had the opportunity to experience Chinese food in other countries such as the US, Canada and even China itself, are somewhat disappointed that the food is not as tasty as it is in Jamaica. Many Jamaicans, including those of Chinese descent, do not like most of the food in Beijing, as it lacks the flavours we have grown to love. Perhaps this 'Jamaican-ness' is missing from the food in Beijing, as the majority of Chinese migrants to Jamaica were not from Beijing, but instead were of the Hakka National group. That group was from the south, with climatic conditions similar to Jamaica. One must remember that China is a huge country and has many distinctive cuisines unique to specific regions. The further north you go in China, the more subtle the flavours, as that is what is believed to be more suited for a cold climate. Further south in China however, the food is more robust and well-seasoned, like the food we are accustomed to in Jamaica.

There are, however, some things about food and eating that all Chinese have in common, no matter which region they are from. They all believe that eating is one of the few pleasures that man has on earth that should be enjoyed by everyone, and that you should eat whatever gives you pleasure and is good for your health. The Chinese perhaps eat more vegetables than any other group. They say that the job of the cook is to prepare the food, and that should be done in such a way that all the diner needs to do is take it from the plate or bowl to the mouth. The diner must not be required to cut up food. Hence, the use of chopsticks instead of knives and forks.

Perhaps the main gift of the Chinese to Jamaican cooking is soy sauce. There is hardly a Jamaican meat dish that is now prepared without soy sauce, both for colour and taste. Then there are oyster and hoisin sauces, as well as sesame oil. Sweet-and-sour sauce was also introduced and quickly became a Jamaican favourite. Pak choi (white vegetable), sometimes called bok choy, and a similar vegetable, Chinese cabbage were also introduced by the Chinese and are still enjoyed by many a Jamaican today.

The Chinese also introduced the wok and stir-frying to Jamaica. There are now several variations of this versatile utensil, as the Jamaican cooks have realised the efficiency and the health benefits of this cooking method.

Chinese food has found a special place among many Jamaicans and no doubt will remain so for a very long time.