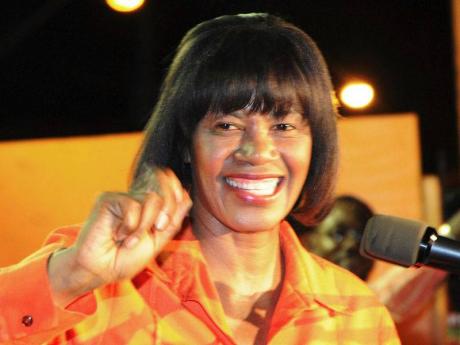 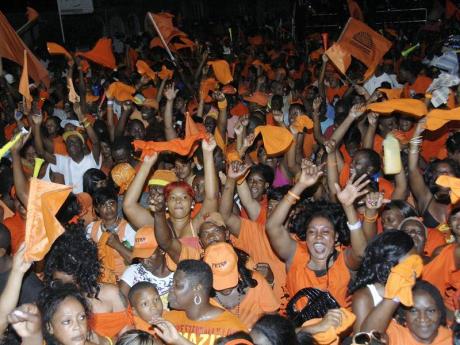 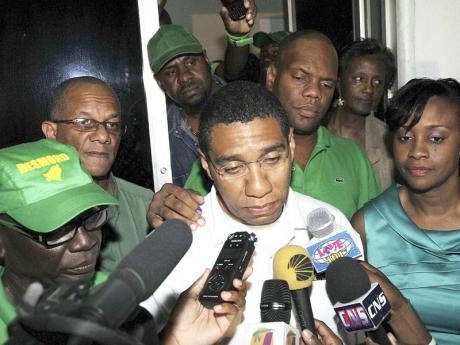 Defying opinion polls that suggested yesterday's general election was too close to call, the People's National Party (PNP) secured a stunning victory, winning 41 of the 63 seats in the House of Representatives.

The party gained 53 per cent of the popular vote.

The result will propel the PNP's president, Portia Simpson Miller, back to the premiership, a job she held for 18 months and lost a mere four years ago when her party was prised from government after more than 18 years in office.

In fact, the defeat of the Jamaica Labour Party (JLP) meant the first time since the advent of universal adult suffrage, nearly seven decades ago, that an administration has been chucked out after a single term - an outcome that will likely lead to much soul-searching within the organisation.

"I want to thank the prime minister who called earlier to congratulate me, and he was very gracious," Simpson Miller said.

"I am humbled by the support of the Jamaican people and I ask you to ensure that you greet JLP supporters with love."

Simpson Miller said her team would be working with all Jamaicans as one Jamaican family "as we shape the future together".

She also commended candidates who came close to victory, saying "you are winners".

In conceding the election, outgoing prime minister and JLP leader, Andrew Holness, accepted the result as the will of the people and said the party would listen to the voice of the people.

"It is a time of reflection and introspection for the Jamaica Labour Party. We see it as an opportunity to rebuild and, starting tomorrow, we will be rebuilding," a sombre Holness said.

"It is apparent that the people of Jamaica still have concerns about the JLP and we will reflect on that. I wish the new Government well. They will face several challenges, but I hope for the benefit of the country they will do a good job."

He added: "I was privileged to have served in a short time. I really did not have much room. I had to make the decision that we made. I feel good that I have executed the duties of prime minister over the short time to the best of my ability, and I look forward to another opportunity."

Holness was prime minister for just over two months, having been catapulted to the job after the surprise resignation of his predecessor, Bruce Golding, who accepted that the JLP would have little chance of victory with him at the helm.

Golding lost public confidence over his administration's resistance of the United States' request for the extradition of now-convicted gangster Christopher 'Dudus' Coke, and the hiring of lobbyists to encourage Washington to go soft on the matter.

In its election manifesto, the PNP promised to renegotiate the country's agreement with the International Monetary Fund (IMF), implement a Jamaica Emergency Employment Programme (JEEP) to arrest the problem of unemployment; and renegotiate the contract of the Jamaica Public Service Company (JPS) to allow for competition in the transmission and distribution of electricity, among others.

It was also the first time that persons were vying for 63 seats in the House of Representatives.

The JLP won the 2007 general election by a razor-thin majority, securing 32 of the 60 seats in the House. The PNP won the other 28.

The PNP had greeted Holness' announcement of election and nomination day, saying the symbolism of the dates meant a lot to leaders of the party. Simpson Miller celebrated her 66th birthday on nomination day, December 12.

"I want to thank Mr Andrew Holness for giving me the best birthday possible that anyone could ever have. And an excellent Christmas gift for the Jamaican people, and a wonderful and beautiful new year," Simpson Miller said after the election date was announced by Holness in Mandeville.

Nomination day was also special for the PNP's campaign director, Dr Peter Phillips, as it marked the 24th anniversary of his marriage to Sandra Minott Phillips while the eve of yesterday's election was his 62nd birthday.

The PNP has been on the election trail for more than a year. It had blasted the JLP government for the handling of the economy and said it had brought shame on Jamaica with its handling of the extradition request for Coke.

In its bid for leadership of the country, the PNP embarked on an all-island tour during which party officials, led by Simpson Miller and 'Star Boy' K.D. Knight, told the country that Bruce Golding was not suitable to continue as prime minister and that the country needed to go to the polls in a general election.

According to Gleaner-commissioned Bill Johnson polls, 21 per cent of Jamaicans lined up behind the JLP in June with that number increasing to 26 per cent by November with Holness at the helm.

The last Gleaner-Johnson poll before the election, done on December 17 and 18, found 38 per cent of Jamaicans were prepared to cast their ballot for the PNP, while 36 per cent would vote JLP.

Heading into the election, the PNP was confident that Jamaicans had accepted its message that it was capable of leading a return to sustained economic growth for the country.

The PNP also claimed the turnout at its mass meetings was "overwhelming, demonstrating the fact that the people are ready for a change of Government."