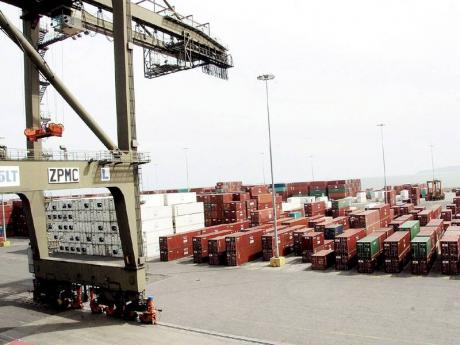 The number of vessels calling at Jamaica's ports last year held steady, even as the Port Authority of Jamaica (PAJ) moves to develop and upgrade infrastructure and equipment to take advantage of increasing opportunities in the containerised cargo market.

The port is also being positioned for divestment.

As part of its strategic move, PAJ is slated to undertake, among other developments, dredging of the Kingston Container Terminal basin and ship channel during the course of this year as it prepares to accommodate larger vessels which will be traversing the Panama Canal within the next two years.

As at October 2011, ship calls from cruise, cargo and miscellaneous vessels numbered 3,012 in the 10 months, of which 1,259 dropped anchor at the main port, Kingston Container Terminal (KCT).

According to the data, prepared by the Port Authority's Corporate Planning and Research Department, domestic cargo handled at KCT and Kingston Wharves totalled 3.08 million tons in the year to October, compared with 3.57 million tons in 2010 and 4.7 million in 2009.

Trans-shipment and domestic cargo handled at the ports totalled just over 26.09 million metric tonnes in the year to October, compared with the 27.06 million tonnes handled in 2010, and the 24.98 million tonnes dealt with in 2009.

Liquid and dry bulk cargo handled at the Kingston Sufferance Wharves during the review period totalled 2.65 million tons, compared with 3.48 million tons for 2010 and 3.52 million in 2009.

The data also shows that 279 cruise ships called at Jamaica's ports up to October, the majority, 122, visiting the tourist resort of Ocho Rios and 80 visiting Montego Bay.

The Port Authority noted that all cruise ship arrivals are included in the data, but double counting of passengers is not. Consequently, the 2,440 passengers who stopped in Ocho Rios and went to Montego Bay were excluded.

Spokespersons at the Port Authority to whom the Financial Gleaner was referred were unavailable for comment.

However, information provided on its database point to the upgrading and infrastructure development at the ports in Kingston as part of a wider strategic move to accommodate the draught of the largest vessels which will transit the Panama Canal.

"The dredging project will improve KCT's competitive advantage and enable the port to serve as a trans-shipment hub for draught restricted ports of the United States East and Gulf Coast," it said. A ship's draught determines how deep it sits in water and is measured from the water line to the underside of the vessel's keel.

The Port Authority is aiming to complete the project by 2014, when the Canal will accommodate vessels with a maximum capacity of 12,000 TEUs or 20-foot equivalent containers.

Those vessels are expected to have a maximum draught of 15.2 metres, a maximum ship length of 366 metres and beam of 48.8 metres. "The pile length at KCT will allow for a depth of just over 15 metres and thus will be able to satisfy this requirement," the Port Authority said.

Part of its plans also call for an increase in the stacking area at the West Berth. This will involve paving of the berth and other infrastructural works, as well as the installation of additional reefer plugs. These capital works will increase the port's capacity to 3.2 million TEUs.

In addition, the Authority plan to rehabilitate equipment and infrastructure and replace operationally inefficient equipment, and improve the navigational equipment stock, including the acquisition of a more powerful tug.

It is also preparing to undertake land reclamation in preparation for future port expansion at Fort Augusta in St Catherine. Construction of that container terminal will increase capacity by a further two million TEUs, taking the total capacity to 5.2 million TEUs.

The Port Authority of Jamaica is a statutory corporation established  by the Port Authority Act of 1972. It is the principal maritime agency responsible for the regulation and development of Jamaica's port and shipping industry. It is responsible for the safety of all vessels navigating the ports of entry and regulation of tariffs charged on goods passing through the public wharves.

In August last year, French shipping group CMA CGM signed an agreement with the Jamaican Government, which will see the company investing US$100 million (J$8.6 billion) to improve infrastructure and equipment, as well as employ 1,000 persons in exchange for a 35-year lease to set up a major hub at the KCT.

At the signing, then Minister of Transport and Works Mike Henry said the memorandum of understanding represented a significant step forward in the Government's programme for the privatisation of the KCT.

However, the Port Authority had emphasised that the CMA CGM agreement was separate from the planned divestment of the port.

"PricewaterhouseCoopers was only recently awarded the consultancy contract for the privatisation, so we are just in the very preliminary stages of the process," explained the PAJ.

The Port Authority negotiated at least two contracts withPricewaterhouseCoopers totalling US$3.8 million (J$333 million) related to consultancy services for the privatisation of KCT. The larger transaction, US$3.33 million (J$286 million), was endorsed by the National Contracts Commission in June 2011, describing the contract as consultancy for phase two of the divestment. The first contract in May 2009 was for US$525,000.

The plan to divest the port was officially announced two years ago in February 2009 by former Prime Minister Bruce Golding.