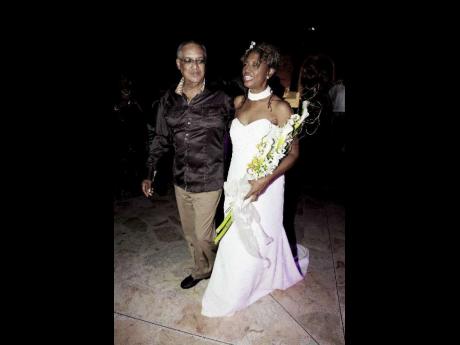 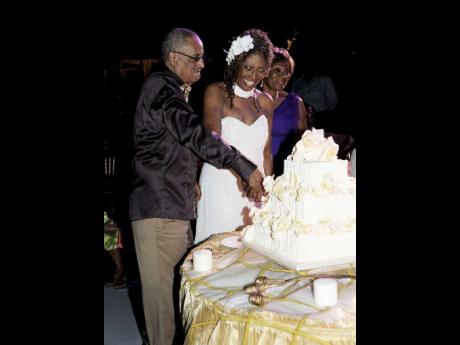 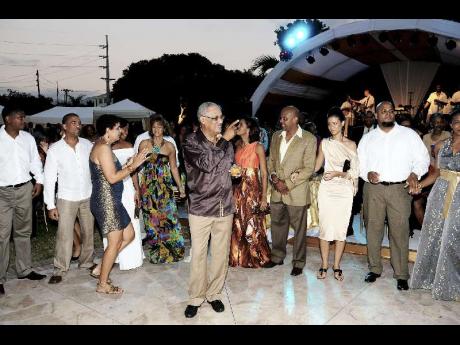 Dr Donald Keith Duncan and some of his children and their spouses await the arrival of his bride. 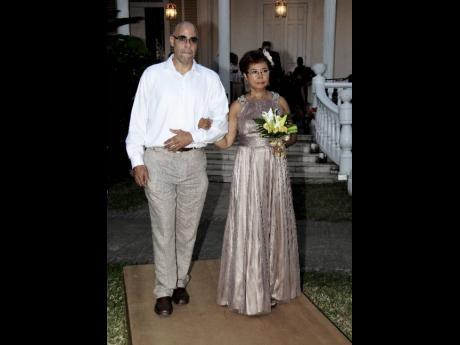 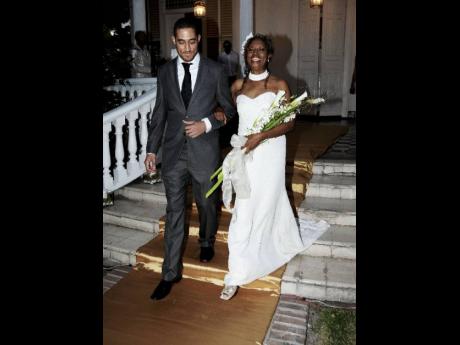 David Manley, son of Beverley Anderson-Manley escorts his mom to her groom Dr Donald Keith Duncan along the gold carpet at the historic Devon House in St Andresw on Saturday January 21. 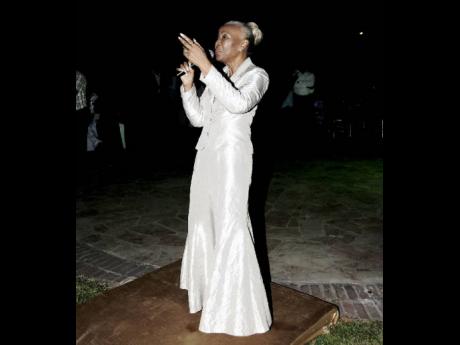 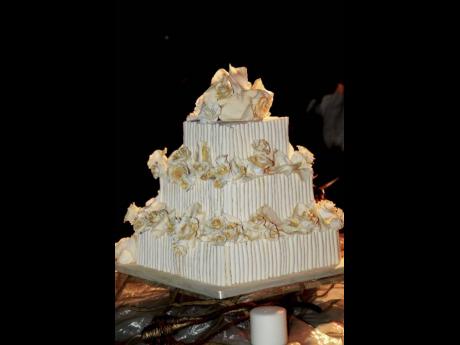 The beautiful wedding cake baked by the Barbara Davis, the matriarch of the family. 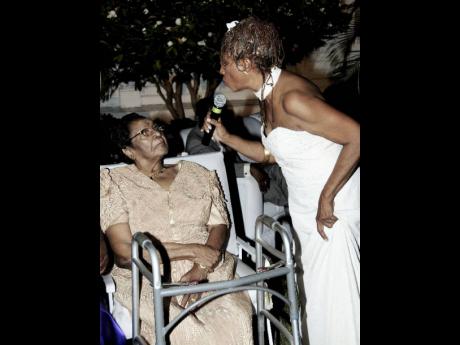 The new Mrs Donald Keith Duncan acknowledges her Aunt Babs (Barbara Davis), the family matriarch, who has made all the wedding cakes for all family weddings over the years. She used to make all the wedding dresses too but due to her advancing years, no longer performs that loving task. 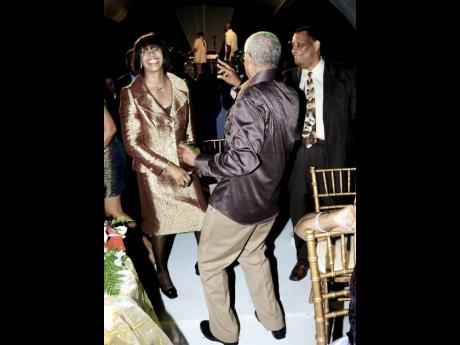 Dr Donald Keith Duncan hits the dance floor with Prime Minister Portia Simpson Miller who ended her toast to the bride with the quip, " Bev, if him ever trouble you, call me!" Looking on at Right is Agriculture Minister Roger Clarke.
1
2
3
4
5
6
7
8
9

There was nothing traditional about the grand occasion; guests received invitations via email that read:

Wedding coordinator Patricia Sutherland and her able assistants executed the entire affair that began with guests entering the venue along the gold and yellow walkway. Beautiful cream and gold tents dotted the perimeter of the area on one side with the majestic heritage house on the other.

There was ample seating on oversized sofas and ottomans or cosy corners with pedestal tables draped in the theme colours. The couple welcomed guests during the meet-and-greet segment, sipping cocktails and enjoying the musical prelude by Touch of Elegance with Della Manley. The soon-to-be husband chose red shirt and black slacks and the bride-to-be, an embroidered sheer over satin one-shoulder sheath. There would be two more changes for the occasion.

Sara Manley, who spoke on behalf the bride's family, described Beverley as the rock on who they all rely and that her marriage was a celebration of love, wishing them happiness and joy. Patricia Sutherland, who spoke on behalf of the Duncan family, said, "Bev came into our life when I was 16 and she had been a friend and guide to me."

The bride designed all three wardrobe changes that were made by Gerzelle Klein. This wedding gown was a strapless off-white brocade embossed in gold bodice hugging number that ended in a train. Her third change was a flowing strapless two-tiered party dress in shades of fuchsia, orange, mustard, purple, pink and white. For the ceremony, the groom wore a dark brown shirt with beige paisley trim and beige slacks. The bride carried a bouquet of white dendrobiums and calla lilies and wore orchid blooms in her upswept sister locks.

Dispensing with tradition, the groom entered the centre of the venue and beckoned his large brood, their in-laws and his grandchildren to form a welcome 'guard of honour' for his new bride and their stepmother.

She appeared, radiant and elegant on the arm of her son David Manley, joined later by her daughter Natasha and both presented her to the "ardent groom" as he was dubbed by master of ceremonies Richard Fletcher, who renamed Beverley, the "blushing bride". The ceremony, which got under way later than scheduled due to a slight wardrobe malfunction, was ably conducted by the Reverend Dr Sonia Davidson and Civil Registrar Silvera Castro.

There were many memorable highlights including Acts of Love by the grandchildren, readings by Ajamu Duncan and David Manley and Myrna Hague's flawless rendition of Here's To Life, Here's to Love and Dr Winston Davidson's Perhaps Love. It was also touching to see the beautifully choreographed dance between female members of the Duncan family and the new Mrs Donald Keith Duncan to the song Empty Chair. At the end, she was placed in the chair and her husband came to stand by her side.

The toasts were many, among them several humorous recollections from Prime Minister Portia Simpson Miller, former Prime Minister P.J. Patterson, Leonie Forbes, Agriculture Minister Roger Clarke, Barbara Blake Hanna, Arnold Bertram, Shirley Spencer, Councillor Derrick Foster and more. The bride made the reply for her husband and thanked just about everyone who had contributed to making their day memorable.