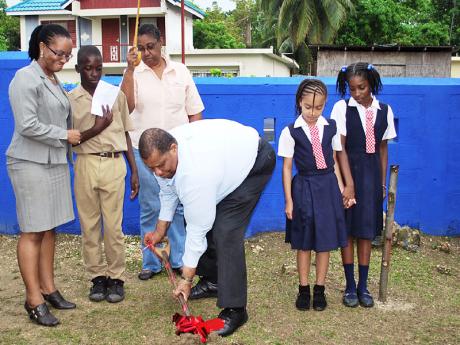 PETERSFIELD, Westmoreland:The Petersfield Primary and Infant School is to open a new library and resource centre in September, a collaborative venture of parents, teachers, past students, and the Government.

Principal Susan Hammond says the estimate for building material is just over $700,000 and labour will be volunteered by members of the community.

She said that the need for the library came into sharp focus just over a year ago and fund-raising activities were commissioned.

Hammond explained that the non-profit group, Negril Education Environment Trust (NEET), was first approached, but it had no readily available metal containers to establish the library.

"When we looked at the amount it would cost to get a container here from Kingston and to transform it into a library, we decided it would be more cost-effective if we built a structure instead," said Hammond.

A subsequent public appeal was made for contributions to the school. Work is expected to begin in July, at the start of the summer holidays, and technical support will be provided by engineers attached to the Jamaica Defence Force.

On completion, the library will receive a book donation from NEET, which will also hand over 10 computers. Already, five laptops have been given to the school by past students living overseas.

"What we have here for a library is a small space, so we don't have space for research and other related library practices for the 900-plus students at the school," said Hammond.

Member of Parliament for Central Westmoreland, Roger Clarke, officially broke ground for the construction and also handed over $100,000 to help offset costs.