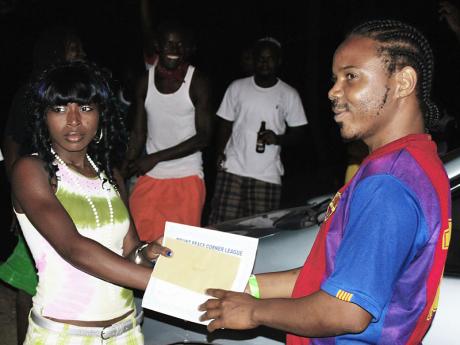 Denver Grant collects a $20,000 cheque and a certificate on behalf of the Montpelier team from Sabrina Garwood for winning the Mount Peace Corner League Football Competition in Hanover.- Photo by Dalton Laing

MOUNT PEACE, Hanover:Montpelier staved off a challenge from Askenish to win the Mount Peace Corner League Football Competition, which concluded on Sunday.

"We are happy to be the winner at last because we went to the finals already, but it is the first time we are winning," said Denver Grant after collecting the $20,000 prize money on behalf of his team.

According to organiser Peter Garwood, the competition was well-executed.

"We started out with 16 teams and played in two zones and then into quarter and semi-final, and here we are today with a champion," he said. "This competition was not sponsored, but the next one will be sponsored by the councillor, Lloyd Crooks, and the winner will be getting $50,000."

Montpelier's two goals came during the first 10 minutes of extra time as Askenish launched counterattacks. Oliver Bright took the ball within striking distance and cracked a shot that bypassed goalkeeper Jeveyon Johnson and landed in the Askenish goal.

Within seconds of that celebration, Kaneily Campbell fired from outfield and the low-moving ball rolled past Johnson's grasp and settled in the goal.

"It was a poor effort by the team in general and a lack of concentration from me as the goalkeeper," said Johnson, who added that his team would be back with renewed energy to claim the title.