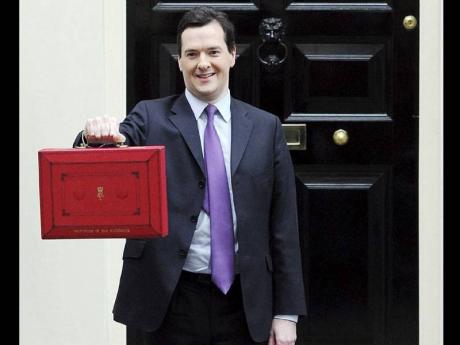 Chancellor of the Exchequer George Osborne holds up his ministerial red box on the steps of 11 Downing Street, London, before heading to the House of Commons to deliver his budget statement. - AP

Britain's finance minister has cut the rate of income tax for the country's wealthiest citizens but imposed a raft of measures to prevent tax avoidance and a hefty new charge on expensive property sales in an attempt to spread the burden of austerity across the United Kingdom's (UK) taxpayers.

In his annual budget statement yesterday, George Osborne said he was cutting the top rate from 50 per cent to 45 per cent by April next year on incomes over £150,000 (US$239,000) a year. He argued that the original higher rate did not yield as much as expected, partly because the rich were able to avoid the tax.

Osborne sought to deflect criticism that the coalition government was being soft on the wealthy by announcing a big hike in the level at which Britons start paying tax, to £9,205 (US$14,500). There are doubts, however, whether the poorest will reap the full reward, given they may lose some benefits.

One group that appears disappointed by the changes are retired people. Age UK, the country's leading lobby group for pensioners, criticised Osborne's plan to scrap the age-related tax allowance, saying it would "affect those with modest pensions and savings for their retirement". Documents published alongside the budget indicate that the Treasury may reap a windfall of around £3.3 billion from the changes to the tax allowances to pensioners.

The 50 per cent tax rate was introduced by the previous Labour government as part of austerity measures introduced in the wake of the banking crisis that led to the country's deepest recession since World War II.

"Together, the British people will share in the effort and share the rewards," Osborne said. "This country borrowed its way into trouble, now we're going to earn our way out."

The leader of the Labour opposition Ed Miliband pounced on Osborne's decision to cut the top rate of tax, mocking him for his oft-repeated mantra that "we're all in this together".

Osborne insisted that the rich should pay a bigger proportion of their income than the poor, and said he was offsetting the cut in the top rate by other taxes on wealth, including a new seven per cent charge on the sale of houses valued over £2 million (US$3.2 million), up from five per cent.

Most of those residences are located in London - a city that has become a second home of choice for many of the world's super-rich who have driven up the cost of homes to levels that are unaffordable to the vast majority of Londoners.

Tony Ryland, a senior tax partner at London Chartered Accountants Blick Rothenberg, said the changes will have "a major effect on the London housing market, potentially driving away overseas buyers".

Overall, the budget measures were broadly neutral. Osborne has little room for manoeuvre, given the government's primary plan to dramatically reduce borrowing and recent warnings from credit ratings agencies that they could cut the country's cherished triple-A rating if public finances don't improve.

The government's debt-reduction programme has been rewarded in the money markets to an extent, even though the economy has flatlined and unemployment stands at a near 17-year high.

The coalition government also announced plans for taxpayers to get an online record of where their tax payments go. The move follows a 2011 initiative in the United States where taxpayers can enter their income tax amounts into a government website and are given a 'receipt' showing how the money was spent by government.