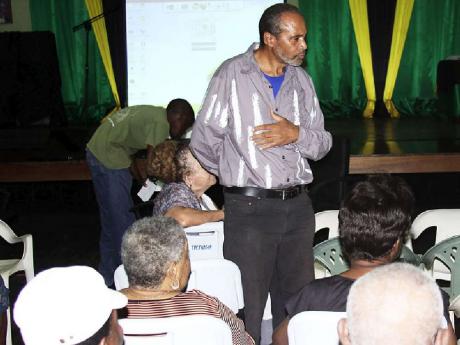 President of the Archaeological Society of Jamaica and new local head of the Falmouth Heritage Renewal Organisation, Dr Ivor Conolley (centre), addresses a town hall meeting to give information on the designation of Falmouth as a historic district on Tuesday. - Photo by Richard Morais

In keeping with the town of Falmouth being designated a historic district by the Jamaica National Heritage Trust (JNHT), residents were sensitised on building regulations and construction guidelines on Tuesday.

The meeting, which was organised by the Archaeological Society of Jamaica through its president, Dr Ivor Conolley, in collaboration with the Jamaica National Heritage Trust and the Falmouth Heritage Renewal Organisation, was held at the Falmouth Town Hall on Tuesday.

A document with extracts from the guidelines was presented to the audience by KeVaughn Harding, coordinator of architectural resources at the Falmouth Heritage Renewal Organisation . Elkanah Robinson, of JNHT's Estate Management Department, also fielded questions.

Among the concerns expressed by residents was the inability to change structures from their original wooden designs to concrete. The concerns was that it was too costly to maintain the original format.

Since they were to comply with these guidelines by law, they enquired as to whether there were any agencies that would give grants or offer easier loans that complied with the dictates of the JNHT.

Another major concern highlighted was the stipulation that the JNHT would only accept plans from registered architects. The fact that local draughtsmen, although competent, were not eligible to draw designs did not sit well with the residents.

There was also apprehension about several architectural marvels - such as The Barrett House - in the town of Falmouth, which had been allowed to fall into ruins.