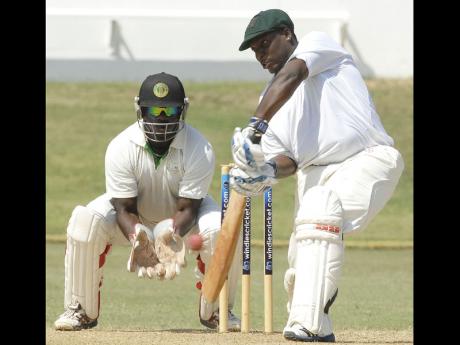 Jamaica's captain Tamar Lambert bats on the way to scoring a half-century on the first day of the WICB Four-Day Tournament semi-final against Guyana at Sabina Park yesterday.- Ian Allen/Photographer

The Jamaicans, who are hunting a record fifth successive hold on the title, were bowled out by the Guyanese for 196 on yesterday's opening day. In reply, Guyana reached 14-1 at the close.

Veerasammy Permaul (3-35), Narsingh Deonarine (3-47) and Devendra Bishoo (3-58) were the main wicket-takers for the Guyanese.

Fast bowler Andrew Richardson has taken the lone Guyanese wicket of Trevon Griffith, who was caught at silly point by Xavier Marshall.

After winning the toss and electing to bat, Jamaica raced to 75 for two off 16.1 overs at lunch.

The first wicket to fall was that of Marshall, who played down the wrong line and was bowled for nine by fast bowler Ransford Beaton.

This brought Pagon to the wicket and in partnership with Parchment, they slowly moved the score to 75 before the latter was adjudged leg before wicket off the bowling of Bishoo.

Blackwood joined Pagon and took the score to 98 before he attempted a big drive and was caught at slip off Permaul for a quickfire 17 off 10 balls.

Lambert joined Pagon at the crease and the two took score to 131 when the in-form Pagon, who hit two massive sixes over long off, was trapped leg before wicket off left-arm spinner Permaul, much to the delight of the Guyanese, who danced and pranced in wild jubilation.

Despite the Jamaican team losing wickets at regular intervals, Lambert batted with a lot of guts and determination, as he held the lower half of the batting together, and brought up his 50 with a boundary over extra-cover.

The captain was dismissed shortly after attaining the landmark, caught off the bowling of Deonarine to be last man out, as the team folded in 79.2 overs.

"I am disappointed," said Lambert. "Having won the toss and choosing to bat first on a good batting wicket, 196 is very disappointing for us.

"However, it is a semi-final game, anything can happen. We have taken one wicket so far and it is still a wide-open game," he said.

He added: "I think that the game is still in the balance and so we just have to go out tomorrow (today) and get some early wickets and see if we can put them under some pressure." Play is slated to resume today at 10 a.m.