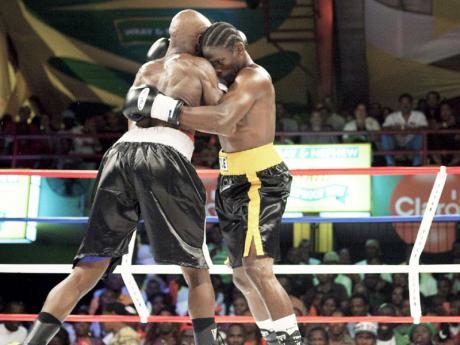 Only one more week of competition remains in the eight-week preliminary stage of competition, and then it will be on to the quarter-finals of the made-for-television tournament that is produced by MJK Productions, sponsored by J. Wray & Nephew, Foska Oats and TVJ, and sanctioned by the Jamaica Boxing Board of Control.

Hylton, who is known to be a very defensive boxer, looked slow and vulnerable in the first round, and Guthrie, who started out being very aggressive, won that round comfortably. He even had Hylton in trouble on a couple of occasions, but he did not pick his spots, and many of his wildly thrown punches missed the mark.

In the second round, Hylton unleashed his most potent weapon - a lethal jab - and scored easily and frequently, as Guthrie came straight at him and was an easy target. He switched to combination punching at times and snapped back Guthrie's head repeatedly. He even played to the gallery near the end of the round to show that he was now feeling very confident.

Hylton stepped up the pace of his attacks in the third round and both the body and the head were targets. Guthrie, meanwhile, lost his rhythm and was made to miss a lot. The tide had turned dramatically from the first-round action, and it was now all Hylton to the end of the fight.

This came in the fifth round when Hylton unleashed a two-fisted attack on Guthrie. During a furious exchange, Guthrie lost his mouthpiece after a hard head blow, and dropped his hands to bring this to the attention of the referee. Hylton capitalised on this error, and hit him with a series of head blows. One hard punch caught him on the nose and drew blood.

The referee stopped the action and asked the doctor to take a look at the injury to the nose. He did so, then recommended that the fight be stopped as the bleeding was continuing. This gave Hylton victory by the TKO route, two minutes and 40 seconds into the round.

Hylton was, however, booed by the crowd for what they regarded as his unsportsmanlike behaviour, for hitting and injuring the inexperienced Guthrie, who had stopped fighting because he had lost his mouthpiece, and was hit several times by hard punches while in the process of appealing to the referee.

In the amateur bouts on the card, Omar Campbell from Bruising Gym defeated Devon Peart from G4S Gym on points, and Jonathan Hanson from G4S scored a majority decision over Kamahl Russell from Sugar Gym, in a hard-fought and keenly contested bout.