Tired of playing with duppies' 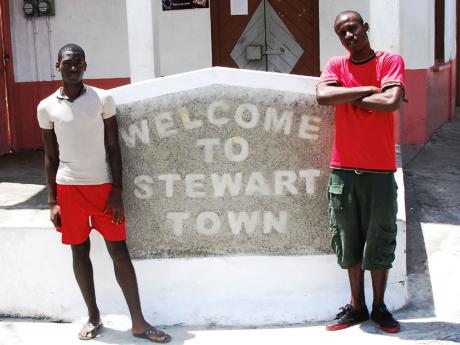 Larnelle Tyrelle (left) and Oshane Smith are among a number of youths in Stewart Town, Trelawny, calling for more attention to the historic community. - Photo by Mark Titus

Graveyard in Stewart Town the only hang-out

WESTERN BUREAU:After years of playing among the dead, youngsters in Stewart Town, Trelawny, are now calling on the authorities to follow through on a promise to provide them with a proper playing field, and are lamenting the lack of attention and job opportunities available in the area.

"We are tired of playing with the duppy them," said Oshane Smith. "I am 23 years old and for years they making promises about the field - from JLP to PNP - yet we are still in the cemetery."

According to Smith, work had started on a new field, but with the change in government, there is not much hope in this becoming a reality.

"Nobody really cares. They talk about young people, that we don't want to do anything, but this is not so in all cases."

However, the absence of an area for recreation appears to be the least of the problems of the district, which has about 900 residents.

Outside of the need for training and job creation, resident Larnelle Tyrelle said the community was in need of entities for socialisation such as a community centre and library.

"There is no community centre," he said. "The library was here and they closed it down, the post office closed. They only remember us when election comes around."

According to 82-year-old Arthur Rose, his home community of Stewart Town was once the commercial hub of the parish, with peddlers travelling miles to trade their wares.

"Things have now changed drastically. We are now leaving to other areas to get work. Brown's Town, St Ann, is now the place to be, when at one time it was us. So the tables have turned," he said.

Derelict buildings, which formerly housed various businesses, including a gas station, wholesale stores and a movie theatre, showed evidence of what the town was like in its glory stores days. Neither has anything been done to capitalise on the rich history on display throughout this rustic community.

"It is unbelievable, it does appear as if we have not made any meaningful contribution to our nation," he added. "I can't recall hearing the word development and Stewart Town mentioned in the same sentence."

One of the challenges might be the fact that problems are not addressed on a unified front.

"Every time a group is formed, it does not last ... . There is a lack of interest shortly after. As youths, our hope cannot rest with the whims and fancy of those we elect to serve. We must stand together and move to ensure that our community is protected by any means," Smith noted.

"As young as we are, we stay out of trouble. Stewart Town is not a problem community. The police have most of their work to do in the other areas that they serve."