Guineas to get Exotic touch 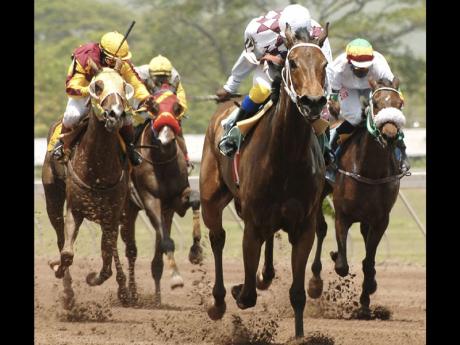 The little-fancied debutante YOU CAN DANCE (foreground), offering huge odds of 41-1 with Carlton Malcolm aboard, romps Division I of the Al Gopie Memorial Cup for maiden four-year-olds and up over the straight five course, at Caymanas Park last Saturday. The bay filly is owned by A.F.O Stables and trained by Welsh Soutar. - Colin Hamilton/Freelance Photographer

The 2012 classic racing season kicks off at Caymanas Park today with the 38th running of the Jamaica 1000 Guineas for native bred three-year-old fillies over 1600 metres.

On Easter Monday it will be the turn of the 3-y-o colts and geldings in the 2000 Guineas. Both races offer purses of $3.6 million.

PHILISTIA, the winter book favourite for the 1000 Guineas by virtue of her close second to ALL CORRECT over the distance last Boxing Day, comes to the wicket without the benefit of a prep race, but according to veteran trainer Noel Ennevor, this will not put her at a disadvantage.

"We decided not to run her in the Thornbird Stakes for the simple reason she would be allowing weight all around to some good fillies who would meet her on level terms in the Guineas," said Ennevor.

"Despite having her first race of the season, she has pleased me in her preparation and is fit and raring to go," he added.

"Based on her close second to the top colt ALL CORRECT in the Supreme Ventures 2-Y-O Stakes on Boxing Day, there's no denying that she has class and this could make all the difference on Saturday," concluded the trainer.

CLASSIC PRINCESS also caught the eye in a 1:28.3 spin for seven furlongs, while EXOTIC GOLD looked well in a 1:14.1 six-furlong gallop.

CLASSIC PRINCESS was highly fancied to win the Thornbird Stakes, but injured herself in the early stages and finished eight lengths at fourth.

"She overreached on the inside in the early stages of the Thornbird Stakes and injured her bulb (a bone on the lower part of her front leg) ... . She has overcome the injury, is working well again and should be right there at the finish."

Trainers Subratie (TRINITHETUTOR) and DaCosta (EXOTIC GOLD) have both expressed confidence going into the race as well.

Based on her vastly-improved performance in the Thornbird Stakes in which she turned the tables on TRINITHETUTOR, who had beaten her three weeks earlier over 1200 metres, the stretch-running EXOTIC GOLD catches my fancy.

She won the Thornbird in a fast time (1:25.3) for 1400 metres and having secured another favourable high number draw, should catch TRINITHETUTOR, CLASSIC PRINCESS and PHILISTIA where it matters.

Other firm fancies on the well-supported card are ETHOS (second race), SMOKIN MAN (third), MARINE DRIVE (seventh), MERU (eighth) and the unbeaten American colt BLAST THEM AWAY (ninth) to make it six straight.