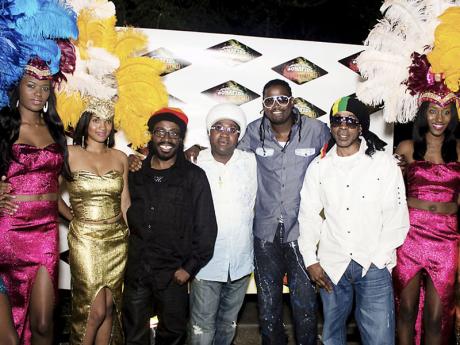 WESTERN BUREAU:Following a successful album launch in Kingston, international reggae band Bonafide received a warm welcome in their hometown Montego Bay as they repeated the same feat as they did in Kingston.

Bonafide did the launch party for their debut Sold Out album at Pier One last Saturday.

The reggae band brought Las Vegas to Montego Bay from the décor to the showgirls, who played hostess as patrons were treated to showcase of entertainment that featured Busy Signal and Etana.

While Busy Signal has been busy touring overseas, he showed his support to the group's latest effort and with a performance of Bumpa that was done in collaboration with the group.

The all Jamaica-born band is originally from Montego Bay, but is now based in Las Vegas in the United States of America. The group consists of Junior Rootz (vocals/drums), Bass Wayne (bass/vocals), Ricky Dread (keyboards/vocals) and Kerry Ranks (DJ).

Reggae songstress Etana made her vocals heard at the red-carpet affair as she did the I Wanna Be The One track on Bonafide's album to much delight for music lovers.

"The band is surrounded by a competent team of key music industry professionals who have every intent on making them another huge band from Jamaica," band's publicist Ra-Umi Alkebu-lan told Western Focus.

Hawaiian reggae star Fiji made his presence felt during his performance with the band and showed he has the capacity to deliver to a Jamaican audience.

Bonafide culminated the Jamaican leg of their promotions for Sold Out in the Second City and will now move to the United States for an upcoming tour in May.