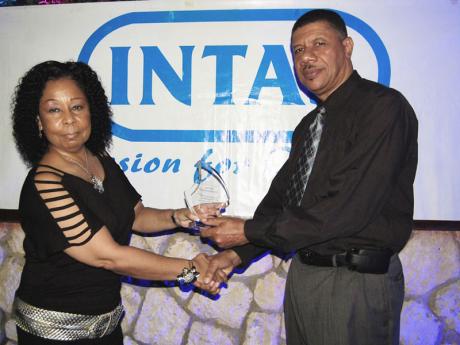 Elizabeth Anderson, business manager for Intas Pharmaceuticals Limited, presents recently retired chief urologist at the Cornwall Regional Hospital, Dr Keith Wedderburn, with an award in recognition of his contribution to the field of medicine in Jamaica. The occasion was the Intas launch in Montego Bay in March. -Contributed

Wedderburn, who recently retired as chief urologist at the Cornwall Regional Hospital and who serves as chief executive officer and managing director of the Montego Hospital, was honoured at the launch of Intas in Montego Bay last month.

Ranked as the 12th-largest pharmaceutical company in the world, Intas is one of the leading players in chronic therapy, having a presence in the market with treatment for illnesses related to the central nervous system, the cardiovascular system, diabetology, and gastroenterology.

Internationally, Intas is present in over 50 countries, and its global strategy includes alliances with leading global pharma companies for the development and distribution of products as well as direct product distribution.

Intas is supported in its endeavours through its extensive network of branch offices and subsidiaries spanning the USA, Canada, Europe, Central and Latin America, Africa, Asia-Pacific as well as the Common-wealth of Independent States.