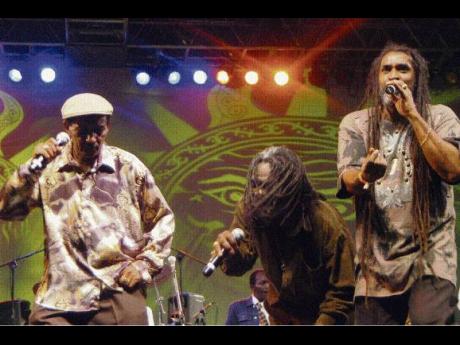 The Tamlins in performance. - File

Although not as visible in the industry as some of their younger counterparts, veteran group, The Tamlins, wants to increase its presence with a new album called Crossover.

Speaking with The Sunday Gleaner recently, Carlton Smith, who, along with Derrick Lara and Junior Moore, makes up The Tamlins, said the group would be releasing its new album in the summer.

Smith said all the songs from the album had already been recorded, but most of them were not yet mixed. Three of those songs, including Rise and Keep It Up, will be released prior to the album's actual release.

Nonetheless, he said listeners are in for a treat.

"We will have different moods but all reggae. Every time we do an album, we always think about fresh melody and fresh lyrics."

The Tamlins started out as a nightclub act in 1970, and by 1972 had won the 'Most Outstanding Group' award. The group has had hits like Baltimore, Ting-A-Ling, My Whole World Is Falling Down, Reasons, Go Away Dream and Eighteen With A Bullet. Their first album was Black Beauty and they followed up with others like Tamlins Greatest Hits, I'll Be Waiting, Love Divine, and more recently, Rebirth, produced by Alborosie and Specialist.

According to Smith, the latest album is somewhat different from previous albums in terms of the way the harmonies and the lyrics are structured.

Based on what will be on the album, Smith has nothing but high expectations.

"Everybody always expects the highest. We are hoping to get a big response from the album. The people always love good lyrics," he said, noting that local and international listeners are being targeted.

He continued, "I am hoping that the young people will get a chance to hear these songs because if they don't hear it, they can't love it. They are seeing one set of artistes over and over."

Despite what seems like a limited presence on their part, Smith stressed that "The Tamlins is still here, kicking, ready and waiting. People have been asking why they are not seeing much of us. If people not seeing you, they think that you are not working, but we are still working."

But Smith has other woes as he believes older acts like The Tamlins are being neglected.

"We are being neglected but the good thing 'bout it is that people in Europe and the Japanese never forget the vintage artistes. In Japan, they will tell us songs that we did not remember the title of," he told The Sunday Gleaner.

"Everybody (vintage artistes) makes new songs but they not playing them. People on radio stations, you can't be partial, you have to play everybody's songs."