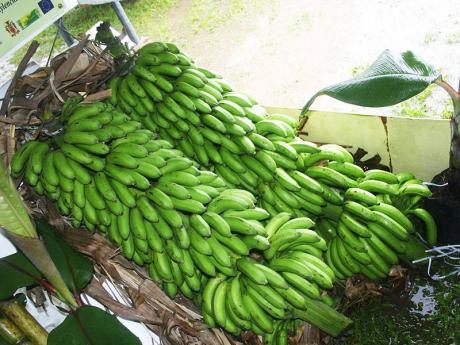 TOP LEFT: The FHIA banana, which is being introduced to farmers across the island, was on display at the St Mary Agri Expo held on Monday at the Grey's Inn Sports Complex in St Mary. In addition to bearing up to 25 per cent more than the Cavendish varieties traditionally grown in Jamaica, the FHIA is resistant to black sigatoka. The cost of spraying to control this disease is a major factor in production. 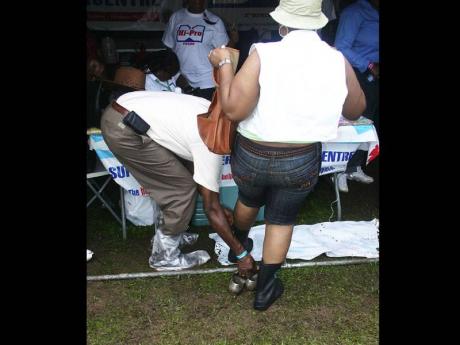 Juliann Cole does a good job of keeping her balance as Eric Williams of Ace Supercentre fits her with a pair of water boots, which she bought after her shoes got filled with water.photos by Christopher Serju
1
2

The organisers, the St Mary Association of Branch Societies, the Jamaica Agricultural Society, and exhibitors were left rueing the unseasonal rain which kept away the anticipated heavy flow of patrons.

However, the show did go on and patron Governor General Sir Patrick Allen and Lady Allen put on water boots to traverse the soggy showground.

"No problem," the governor general told The Gleaner of the impact on his duties, going on to explain that it was all in a day's work.

Food vendors lamented the slow business, expressing hope that things would pick up. But given the low turnout, this was not likely to happen.

The Coconut Industry Board, which had trucked in some 1,000 jelly coconuts in anticipation of good business, took a beating.

However, at least one company, Ace Supercentre, enjoyed a windfall from the heavy showers which made walking and driving very difficult, a few vehicles getting stuck in the mud.

When The Gleaner visited its booth, the company was doing thriving business selling water boots, even though this was not part of the original game plan.

"We have gone (sold) over 30 pairs already," Eric Williams said. He explained that after the staff had used up most of their plastic galoshes, sharing some with members of the public, they hit upon a bright idea.

"We made contact with someone from our store who was actually coming to the show. He was in Kingston, so he ran down to Ace (White Marl, Spanish Town) and picked up a few boxes and we have almost sold out," he explained.

Sales of pharmaceuticals and farm and garden items were nowhere near previous years.

One of those who ended up making an unplanned purchase of water boots was Juliann Cole, who travelled from Kingston to visit the show, which was in its 26th staging, for the first time.

"My shoes were filled with water," she said, in explaining her need to make the purchase. Then she was off to buy more plants and fruit trees.