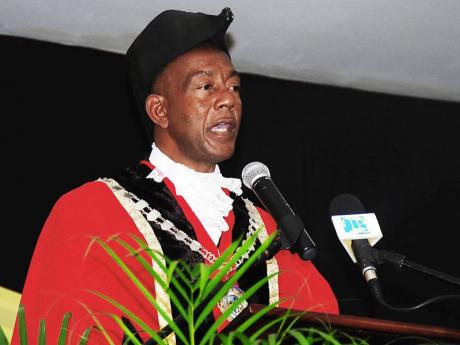 Mayor of Montego Bay Glendon Harris addresses the audience at his swearing-in ceremony with the controversial Jamaican flag backdrop.

A shortage of cloth might have been the real reason for the controversial absence of 'green' from the backdrop used during the recent swearing-in ceremony for new Montego Bay Mayor Glendon Harris.

Addressing the issue, which has taken on a vexing civic and political overtone, during yesterday's sitting of the St James Parish Council (StJPC), Harris said the decorator who did the function has accepted responsibility for the issue.

In recent days, the ruling People's National Party (PNP) has come under stinging criticism from civil society and the Opposition Jamaica Labour Party (JLP), which have both raised questions about whether there was an attempt to politicise the ceremony.

"The decorator has accepted the blame for what happened and has promised to make a public statement accepting responsibility," Harris said.

"As a gesture of his goodwill, he has even agreed to refund the money ($30,000) that he was paid for the function."

Lay the matter to rest

While arguing that some persons are now seeking to gain political mileage out of what transpired, Harris said while what happened was an issue of concern and is regrettable, he wished to lay the matter to rest and would not be making any further statements.

"Some people are trying to use it to score cheap political points but I want to make it clear that the election campaign is now over and it is time to do the people's business," said Harris.

In further seeking to discredit the notion of ulterior motives, Harris said, backdrop aside, it was instructive to note that the national flag was prominently displayed on the stage during the ceremony.

"I am satisfied that no instructions were given by any councillor or council staff to remove the green from the backdrop," the mayor stated categorically.

However, Harris' predecessor, Charles Sinclair, said he was absolutely convinced that what happened was a deliberate act aimed at slighting the JLP, whose most prominent colour is green.

"It is my understanding that the decorator was specifically told to leave out the green because it was a PNP function," said Sinclair. "I further understand that the instructions came from an individual, who claims he has ties with the Office of the Prime Minister."

Yesterday afternoon, PNP Chairman Robert Pickersgill said the party profoundly regretted and unreservedly condemned what "seems to have been the misuse of the colours of the Jamaican flag at the recent swearing-in ceremony".

"The PNP has always been respectful, and will continue to be, of all civic ceremonies, including civic functions organised for the swearing in of mayors and councillors,"said Pickersgill.

He added: "Even more so, the PNP has always jealously guarded the Jamaican flag as a symbol of dignity, achievement and the fierce independence of our people and country."

Pickersgill said the party was publicly calling for all mayors and councillors to ensure that all civic functions are organised in keeping with necessary protocols, "including ridding these functions of any semblance of partisan behaviour".

The decorator's association with the StJPC started during Sinclair's tenure as mayor and indications are that he has done all the major civic functions since 2010.