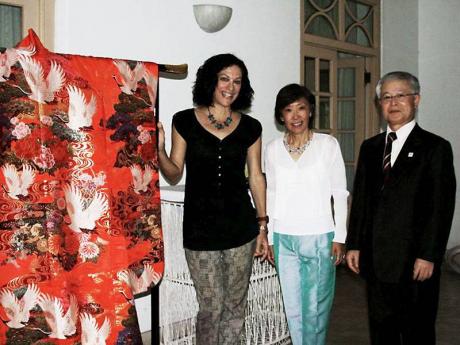 His Excellency Hiroshi Yamaguchi, ambassador of Japan, and Lady Yamaguchi, with IPP president, Vered Saldinger (left), admire the special display of a Japanese all-silk wedding kimono at the Japanese Embassy. 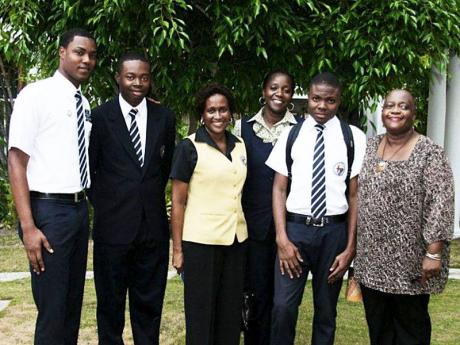 The focus of the International Proxy Parents (IPP) is the support of needy high school students. This year, the group hosted its annual students' social on Friday, March 23 at the residence of the Ambassador of Japan, His Excellency Hiroshi Yamaguchi

The social was attended by 41 of the 62 students supported by IPP, accompanied by their guidance counsellors.

His Excellency Hiroshi Yamaguchi, Ambassador of Japan, after being welcomed by IPP's past president, Joy McHugh, gave an insight into Japan and its culture, which was well received by the students. IPP president, Vered Saldinger, in her overview of IPP, encouraged the students to use this opportunity afforded them.

The students performed in fine style with dub poetry by Shanice Watson and Rochelle Walker of The Queen's High School.

This was followed by an engaging rap piece from Alden Currie, the student tutored by IPP member Perju Wilson, followed by Convent of Mercy Alpha Academy's Alicia Christie's rendition of Wind Beneath My Wings.

Another highlight of the afternoon was the inspiring musical and motivational presentation from Symone Thomas, visually impaired music educator and graduate of Edna Manley College of the Visual and Performing Arts.

Knox College closed the enjoyable afternoon with the 'Thank You', on behalf of the students.