China intrusion into the Caribbean: benign or sinister threat? 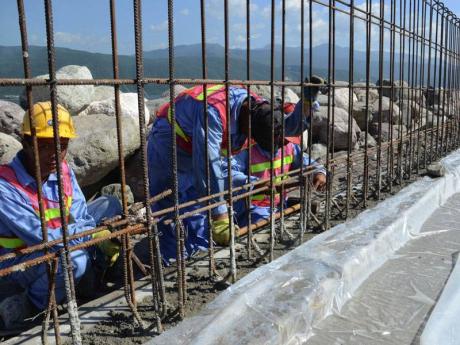 'China Buys Inroads in the Caribbean, Catching US Notice'. This is the headline of an article in the New York Times of April 7 this month.

With it's dateline Nassau, Bahamas, the report rapidly tells the tale of Chinese 'largesse' in the southern sea-flank of the United States of America.

It speaks of a brand new $35-million stadium - a gift from the Chinese government which opened in The Bahamas a few weeks ago, before going on to complete its picture of an expanding Chinese presence: "The tiny island nation of Dominica has received a grammar school, a renovated hospital and a sports stadium, also courtesy of the Chinese. Antigua and Barbuda got a power plant and a cricket stadium, and a new school is on its way. The prime minister of Trinidad and Tobago can thank Chinese contractors for the craftsmanship in her official residence."

Jamaicans are well aware of Chinese investment in the sugar industry and the sometimes controversial infrastructure development programme.

What's new you might ask? For centuries, when it wasn't chariots, mounted hordes, or gunboats, winning friends and influencing states required gifts of those who could afford it.

China is in such a position today. It is projected by some to become the world's biggest economy in a decade or two. It has lots of US dollar holdings earning a mere pittance, requires huge quantities of raw materials, metals, energy resources and access to markets if it's phenomenal economic growth of the past decade is to be maintained.

It does not seek, based on both its current rhetoric and activities, to become a world military power in competition with the USA even though, naturally, it values and jealously guards its right to exercise and build its muscle in its surrounding theatre of Asia.

And it insists that Taiwan is part of China - a view, dogma, doctrine or belief that US policy does not accept. These gifts in the Caribbean are small potatoes to exchange for potential support in relevant international fora.

Furthermore, in post-cold-war globalisation, US interests in the Caribbean are considered entirely safe - safe as patties in a glass case. The problem is not development, hence there's no more need to lavish significant sums of US aid on small struggling, hardly strategic neighbours who have nowhere else to turn.

The problem now is to restrict production and transshipment of illicit drugs, police and deny the possibility or potential offered by drug cartels' financing schemes and networks to morph into full-fledged terrorist financing, destroy the potential for tax evasive financial arrangements and migration of the unwanted.

In other words, US policy towards the Caribbean, as experienced and interpreted by the mass of the population, is not so much one of neglect as of reprimand. Mind you, even as these perceptions continue to be alive, remarkably some might feel, attitudes towards the US remain largely positive. A big swath of the population would choose migration at the drop of a hat. Love America? Yes, and by the way, a lot of 'de famly dey a farrin'!

And this is evidenced by some of the many comments that accompanied the article. So, for instance, Rudolph from New York, NY, comments that it is "OK for the USAID to build schools, hospitals, roads all over the Far East (Pakistan, India, Vietnam, Philippines, South Korea, Afghanistan, Bangladesh, etc), but for China to do the same in a poverty stricken Caribbean is a no-no.

Also, with Obama's latest goal to strengthen US military bases within short flying distance from Beijing (starting with Darwin) is OK, but Chinese forces in the Caribbean or Central America would not be tolerated. Typical American spirit: I will have it both ways and you do as I tell you."

But there is also this from Alan Kimmel of Chicago, Illinois: "So the Chinese are financing stadiums, schools, ports, resorts, hospitals, and other major projects in the Caribbean. Why is this seen as a threat to us? Such investments should be welcomed as helping to develop the economies of these countries on our doorstep. If nothing else, it is an example of peaceful competition - where everyone can win."

Where the chips shall fall, however, depends on those with influence on foreign and strategic policy in the US policy apparatus. Hawks, armchair warriors, war profiteers and jingoists, I fear, may indeed prevail. But that would surely be a pity.