A moment with Nutsie 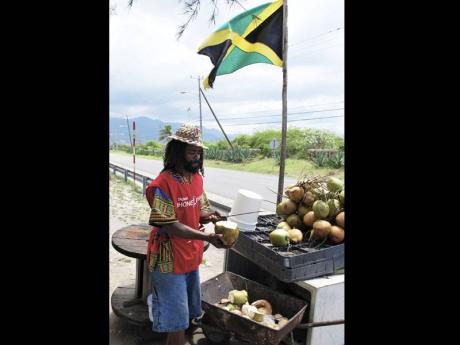 Nutsie doing what he does best. - photos by Robert Lalah 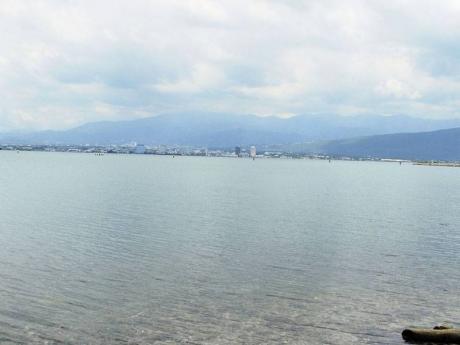 The view of the sea from near the cemetery. 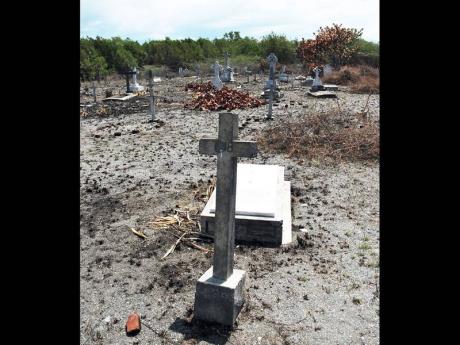 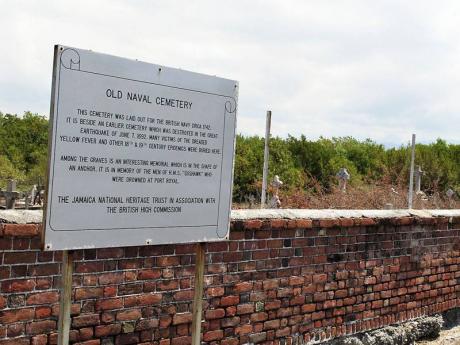 It's not often that you find yourself standing in line to purchase a coconut. It just doesn't feel natural. Nevertheless, I wanted the coconut and four persons were already waiting when I got to Nutsie's post last week. Nutsie perhaps is not the name his mother gave him, but it's the name the coconut vendor has proudly taken as his own over years of selling the treat in Kingston.

He was positioned near the entrance to the airport along the Palisadoes roadway when I visited. A Jamaican flag was flying nearby and a giant picture of Barack Obama was hanging from a tree behind him.

A blue station wagon was parked in front of the stall and as Nutsie skilfully used a machete to prepare the coconut for consumption, three women, all wearing lots of gold earrings and chains, stood waiting. Meanwhile, a lazy-eyed fellow of about 60 leaned on the car looking on.

"Hey main, you really good at what you doin'," said one of the women. Nutsie smiled and handed her the coconut. The other women watched her enviously and she tilted her head and greedily drank the water from the nut.

"You evil," a second woman said. "Hey nuts main, you bedder make sure my coconut's just as good, main." It appeared Nutsie wasn't quite understanding what was being said but he handed her a coconut nonetheless.

I was next in line. As I was about to declare my intentions to partake of the largest coconut the good fellow could find, I was interrupted by a squeal from the woman who had most recently collected her purchase.

"Ooh! Oh my Gawd! It's so long I ain't been in Jamaica, main. I love this Nutsie, I just love it," she said. Nutsie smiled. The lazy-eyed man leaning on the car sneezed.

Not long after, I collected my purchase from Nutsie. I will admit here that it was the best coconut I've had in a while. I said this to Nutsie.

"Yes, man. Thank you, man," he said. Not the most chatty person.

I walked over to one of the women and asked her if she had just left the airport.

"Oh yeah, main. Mi lives into Hatlanta and ongle get vacation for a week," she said. "So mi come home to come get some fresh hair and relax," she said. I welcomed her home and looked over at the man leaning on the car. He seemed to be knocking on sleep's door. I assumed he was the driver of the car because he was clutching a bunch of keys. I asked her if he was going to have a coconut as well. I suggested it might revive him a bit. "No main, he ain't drink it," the woman responded.

Not long after, the recently landed women and their lazy-eyed driver jumped back into their vehicle and took off.

It was just Nutsie and I. I told him that it was my first time actually stopping in the area. I'd always just passed by. "You must stop more time, man," Nutsie said. He went on to tell me that I should head a bit further down the road to look at the lighthouse and if I had the time I should go to the Old Naval Cemetery down the road. Since it was still early and it had received the endorsement of the man who sold me the best coconut I've had in a while, I decided to take his advice.

Now the road that leads from the airport to Port Royal is quite lonely but I will admit that there are spots along the way that are nice. The water comes right up to the roadway. I spotted the lighthouse and later came across the Old Naval Cemetery. Now, anytime you're in a cemetery, it's a creepy experience, but mine was made worse by the sudden arrival of a square-headed fellow on a bicycle. I had just stepped inside when I looked back at the gate and spotted him. He waved hello and I walked over to him.

"Boss, yuh know seh is a cemetery?" he asked. I wasn't sure how I could have missed the signs, but I simply told him yes. "Den yuh can tan up inna cemetery by yuhself so?" the square-headed man asked. I told him I was just taking a look at the place and was about to leave anyway. I asked him if he frequented the area. "Yes man, is Port Royal mi live," he said as he and I walked away from the cemetery.

"Mi go and come all the while, so dat's why mi seh it strange when mi see you stand up alone inna di yard. Mi ah wonder if is duppy mi ah look pan," he said, chuckling. The man scratched his head.

"Eem, boss," he said. "Mi thirsty and yuh have a jelly coconut man up di road who sell sweet, sweet jelly. Buy mi one nuh please?" he said. I smiled with myself and happily obliged.