Shillingford puts Aussies in a spin 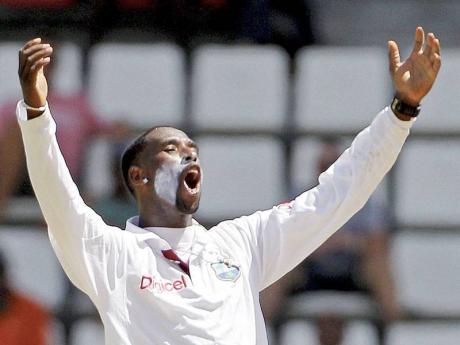 West Indies' Shane Shillingford celebrates after taking the wicket of Australia's opener David Warner, who was caught by teammate Kieran Powell for 50 runs, during the opening day of their third and final cricket Test match in Roseau, Dominica, yesterday. - AP

A four-wicket haul by off-spinner Shane Shillingford underlined a disciplined West Indies bowling effort, but an unbroken 43-run eighth-wicket stand saw Australia fight back at the close on the opening day of the final Test here yesterday.

The 29-year-old right-armer claimed four for 77 as the Aussies, winning the toss and batting, finished on 212 for seven at Windsor Park.

Shillingford erupted in the first hour after tea, snatching three wickets cheaply as Australia slipped to 169 for seven.

However, wicketkeeper/batsman Matthew Wade and Mitchell Stark, in for his first match of the series, combined to deny the Windies any further success.

Wade was unbeaten on 22 from 72 balls with three fours, while Starc's 24 has come from 40 balls and included a six - a straight hit off Shillingford in the day's last over.

Earlier, opener David Warner stroked an even 50 and vice-captain Shane Watson, 41, as they pulled Australia around from the loss of Ed Cowan in the day's second over.

The left-handed Cowan misjudged one from seamer Ravi Rampaul pitched on middle and off-stump and shouldered arms to the eighth ball of the day and was adjudged lbw for one with Australia having just one run on the board.

Warner and Watson then put on 83 for the second wicket, but the partnership was a slow one as West Indies bowlers proved disciplined.

Both players departed after tea, forcing Australia to rebuild yet again.

Watson was first to go when he pulled a short ball from West Indies captain Darren Sammy to deep square leg where Narsingh Deonarine pouched an easy catch at 84 for two.

Warner, dropped on five by Sammy at second slip off Rampaul in the day's eighth over, followed Watson soon afterwards, slapping an easy catch to Kieran Powell at cover off Shillingford.

Captain Michael Clarke (24) and former skipper Ricky Ponting (23) put on 37 for the fourth wicket before Australia lost four quick wickets for 27 runs, as Shillingford ripped through the middle order.

Ponting's miserable series continued, however, when he popped an easy catch to Sammy running around to leg slip at 142 for four, before Clarke was taken low down at short leg by Adrian Barath.

Shillingford snared his fourth scalp when left-hander Mike Hussey edged to first slip where Sammy dived one-handed to his left to take a brilliant catch at 164 for six.

With five runs added, Ryan Harris pulled at a short ball from fast bowler Kemar Roach, only to glove a leg-side catch behind, with just five runs added.

Wade and Starc then came together in a breezy stand, to frustrate the Windies attack and carry Australia to the safety of the close.

M Starc not out

To bat: B Hilfenhaus, N Lyon