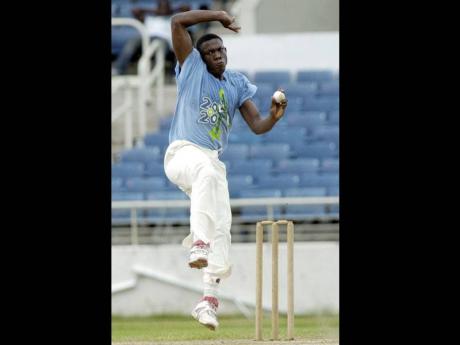 Left-arm fast bowler Sheldon Cotterell says he is still trying to come to terms with being presented the Andy Roberts Award, for being the Most Promising fast bowler during the just-concluded West Indies Cricket Board (WICB) Four-Day Tournament.

The 22-year-old, who was presented with the award following Jamaica's win over Barbados in the tournament final last Monday, took home the accolade after claiming 14 wickets in seven matches.

"I was surprised when I heard my name called as prior to the awards ceremony I did not know that such an award existed," said Cotterell, who since making his debut last season has been bowling the new ball along with Andrew Richardson.

"I was overwhelmed, especially when my teammates started to shout my name, and it's a feeling I will never forget as growing up in cricket I have never had that type of joy before of collecting a prize or anything like that."

The Andy Roberts Award is one of several individual awards that was recently instituted by the WICB as a means of rewarding outstanding performances throughout the season.

The others are The Vivian Richards Award (most runs), The Courtney Walsh Award (most wickets), The Clive Lloyd Award (most catches) and The Malcolm Marshall Award (leading all-rounder).

Cotterell, who is a past student of Penwood High and hails from the inner-city community of Olympic Gardens, said the prize is a reward for his hard work.

"I think it is an accomplishment as at least I can see that my hard work is paying off and people are seeing my work out there in the Caribbean.

"In every aspect of my game I put in 150 per cent, be it in training or during a match. I work hard with my coach and trainer," he stressed.

The Jamaica Defence Force seamer, who did not play youth cricket for the country, but was spotted two seasons ago by national selectors in domestic competitions, also said he thought that it was his pace that landed him the award.

"For one, my pace and aggression, as that is what I always bring to the table," said the tall and stoutly built Cotterell, who delivers with a similar action to that of ace Australia speedster Mitchell Johnson.

"Secondly, somewhat my line and length, which helped me to take my wickets. I could have been better, but I give thanks," he pointed out.

Cotterell hopes the award is a signal for greater achievements.

"The hope is that I will remain injury free and in future tournaments pick up more wickets as my dream is to one day represent the West Indies."