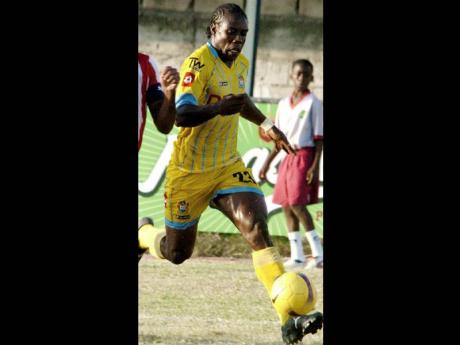 Jermaine 'Tuffy' Anderson is hoping that if he emerges as the leading goalscorer for this season's Red Stripe Premier League it will open doors for him to ply his trade abroad.

"It (top goalscorer's award) would mean a lot to me, because maybe that could take me somewhere from out here," Anderson reasoned. "Once you are the leading goalscorer it is good for you, so I keep working at it and hope I can be the man at the end of the date.

The 33-year-old has his sights set on Vietnam, where he previously spent a month training with Hai Pong.

"I am looking forward to going back down in Vietnam because I was there before and I think that is the place I want to play some (foot) ball," he noted.

The Waterhouse centre forward improved his tally to 14 goals in guiding his team to a 2-0 win over Harbour View in their 36th-round meeting on Sunday evening at Drewsland Stadium.

Anderson headed home in the 88th minute to break the deadlock, before substitute Vincent Earle marked his return to the team, following an injury layoff, with a thunderous strike in the 90+3 minute.

Anderson should have improved on his three goals advantage over his closest pursuers for the Golden Boot with two rounds of games remaining. He, however, along with his teammates were wasteful, especially in the second half of a game they totally dominated.

The burly striker is optimistic that those missed chances do not come back to haunt him, as he knows a player could net several goals against one of the teams in the bottom six.

"If you look at the bottom six and the teams that have dropped out, I have to watch them, because it is normally them that allow like some seven or eight goals," Anderson stated.

"I am not saying that I have gone with it as yet, I still have to work hard because we have two more games to go," he added.

Anderson believes his team squandered the opportunity to win the league but is aiming to finish as the leading scorer as compensation and help the team to finish second in the standings.

"From earlier out the team dropped some vital points, which if we didn't drop those points maybe we would run them (Portmore) down and win the league, so we are the ones who threw away the league this year," Anderson shared.

"I think it would be a good thing for the club to come second and have the leading goalscorer as we can't catch the leaders, so that's the two main things we have to go for right now," he added.

Harbour View's head coach, Donovan Hayles, who was witnessing his team lose for the first time in six matches, conceded that they were outplayed.

"Today we were very flat and playing against a Waterhouse (team) at home. I think they created a lot of chances and the result was a true reflection of the game," Hayles reasoned.

"I think they had the better of the game and we weren't really much in it," he added.