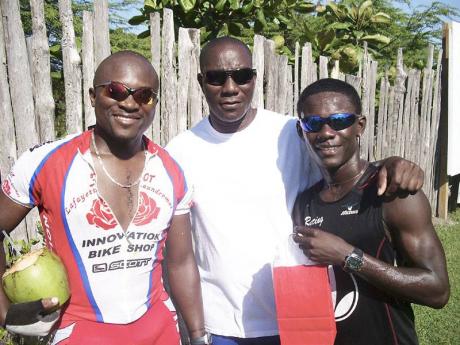 Members of the Secret Powerhouse team from (left) Leighton Anderson, Sheldon Scotsman and Ronique Williams pose for a photo after winning the Jakes Off-Road Triathlon on Sunday. - Nackeisha Tomlinson photo

About 100 persons participated in the event that was sponsored by Nature Valley and Wata. The triathlon included a 500-metre swim, a seven-kilometre run and a 25-kilometre mountain bike ride. Scotsman took care of the swimming leg, Anderson dominated the riding and Williams ran for a combined time of 1:18:25.

Scotsman, who works in the water sports industry and has competed in marathons in the British Virgin Islands, said the level of competition was very high. He told The Gleaner that although the event was well organised, he thinks more locals should enter the competition.

Chris Palmer also lauded the organisation of the event, which he said compared favourably with other marathons in which he has participated.

The event featured persons from different sections of society bonded by their love of participation in sports. Howard Lynch from the Fun and Trills Adventure Club in Kingston was at the event with seven other members. Although they are primarily a cycling club, he said they participate in this and the famed Reggae Marathon. Lynch also believes the triathlon is an ideal way to enjoy Jamaica whilst maintaining a healthy lifestyle.

Jason Henzell, coordinator of the event, attested to its success and noted that funds from this year's triathlon will go towards the edusports programme that the Treasure Beach Foundation is currently undertaking in eight primary schools and two basic schools.

The programme aims to utilise sports as an intervention strategy to assist students with numeracy and literacy.

Describing the event as community-based, Henzell said he was grateful for the participation. However, he wants to focus on the inclusion of a lot more persons from the area and the wider St Elizabeth as they were noticeably absent from the competition. He attributed their lack of participation to the fact that many locals do not own bikes and are unable to swim.