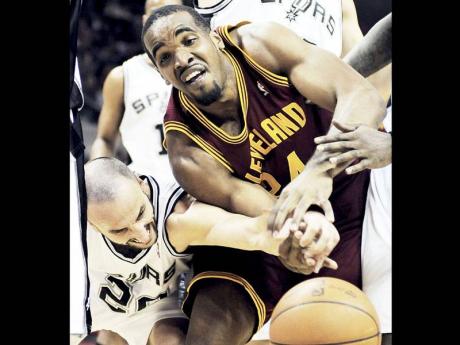 Metta World Peace was subdued and contrite in the Los Angeles Lakers' locker room, apologising to Oklahoma City's James Harden for throwing the elbow that sent them both to the locker room in the second quarter.

They both missed a beauty of a game that could echo into the post-season for two division leaders.

Kobe Bryant scored six of his 26 points in the second overtime alongside an unorthodox Lakers line-up and Los Angeles rallied from an 18-point deficit in the second half for a 114-106 victory over the Thunder on Sunday.

Pau Gasol had 20 points, 14 rebounds and nine assists for the Lakers, who made an impressive comeback in their regular-season home finale against off-target Thunder stars Kevin Durant and Russell Westbrook, who combined to miss 42 of their 56 shots.

"It's not so much that we beat Oklahoma, but how we did it,'' said Bryant, who shook off his own woeful shooting game with two key three-pointers late in regulation. ''In the play-offs, particularly if you don't have home court advantage, you're going to have games like this. We have to have the poise and the confidence to just keep chipping away.''

Yet everything after half-time was coloured by the drama and violence that occurred 1:37 before the break.

World Peace had just dunked over Durant and Serge Ibaka on a fast break and was headed back up court when he ran into Harden. While pounding his chest with his right arm, World Peace raised his left elbow over Harden's shoulder and cleanly hit Harden in the back of the skull.

Harden dropped to the court and stayed down for about a minute before heading to the locker room. Ibaka and other Thunder players challenged World Peace, but were kept apart, and World Peace was ejected after officials reviewed the tape.

''I got real emotional and excited and it was unfortunate that James had to get hit with the unintentional elbow,'' said World Peace, who had scored 12 points and played solid defence on Durant. ''I hope he's OK. Oklahoma, they're playing for a championship this year. I apologise to the Thunder and James Harden. It was just unfortunate.''

Manu Ginobili scored 20 points to lead San Antonio to their seventh straight victory. San Antonio (47-16) moved 1 1/2 games ahead of Oklahoma City, which lost to the Lakers earlier Sunday, in the race for the best record in the Western Conference.

Cleveland lost for the fourth time in their last five games despite the Spurs giving Tim Duncan the night off. With the play-offs right around the corner, the 35-year-old Duncan was the only active Spur not to play.

The Hawks took their final lead at 112-111 on Joe Johnson's three-pointer with 1:50 left. Anthony countered with a jumper 10 seconds later for the final margin.

JaVale McGee scored 17 points, throwing down a half-dozen dunks in the second half and Denver pulled away to beat Orlando.