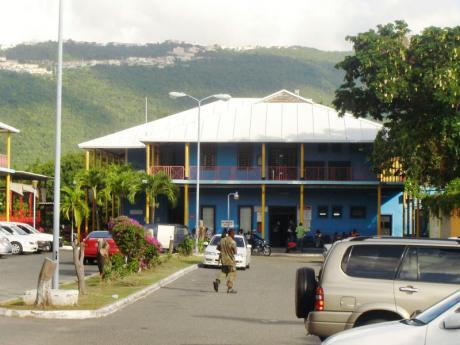 Bustamante Hospital for Children. Fears of a tuberculosis outbreak loom at the institution.- File

Some health professionals at the Bustamante Hospital for Children are warning that an outbreak of tuberculosis (TB) may rock the institution if proper isolation measures are not implemented for patients with the disease.

The workers claim that the isolation measures now being used are inadequate and not in keeping with international standards.

On Friday, Shirley told The Sunday Gleaner that only one TB patient is currently on the isolation ward as they were all treated and sent home.

Shirley also defended the adequacy of the quarantine measures.

"The isolation ward presently is adequate and functional and it fits into the programme of recovery that is required," said Shirley.

He added that children are less likely to transfer the TB virus and that "modern meds suppress the virus so well that it is unlikely that it would be transferred" from one patient to another.

During a recent visit to the Bustamante Hospital for Children the news team found that the "isolation area" on the 5 East isolation ward, which is also known as the Glen Howard Ward, was not enclosed.

The area is quarantined by cubicles and a wooden door; none of which go all the way to the ceiling.

Isolation is also done at the hospital's nursery, but hospital sources claim that the measures there are inadequate as well.

"This puts other patients, nurses and doctors at risk, especially the children since their immune systems are already compromised. Putting up partitions will not do," said a source close to the situation.

According to the World Health Organisation (WHO), TB is caused by bacteria (Mycobacterium tuberculosis) that most often affect the lungs.

The disease is curable and preventable but it is spread from person to person through the air.

"When people with lung TB cough, sneeze or spit, they propel the TB germs into the air. A person needs to inhale only a few of these germs to become infected," read a section of TB facts published on the WHO's website.

The WHO also noted that TB, which is particularly difficult to diagnose in children, is second only to HIV/AIDS as the greatest killer worldwide due to a single infectious agent.

The ward visited at the Bustamante Hospital for Children also houses young patients living with HIV. One of them was stationed just outside the door leading to the so-called "isolation area" where the TB patients were being treated.

"The room should not have an open roof, it should be enclosed," said a health professional stationed at the children's hospital who asked not to be named.

The source also revealed that the matter was first brought to the hospital's management years ago. "It has been a talking point for years."