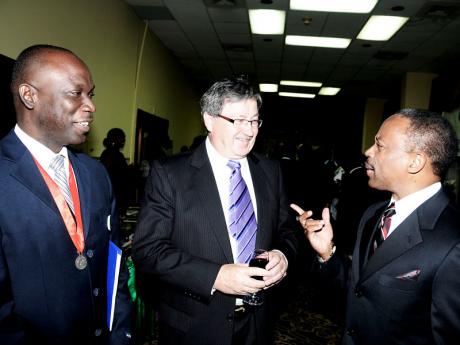 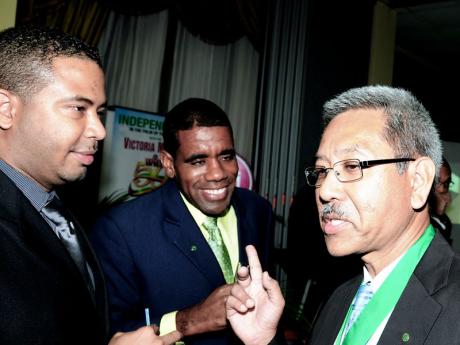 From left: Ryan Blake and Dane Guthrie listen to Christopher Lue, a past president of the Jamaican Institute of Architects. 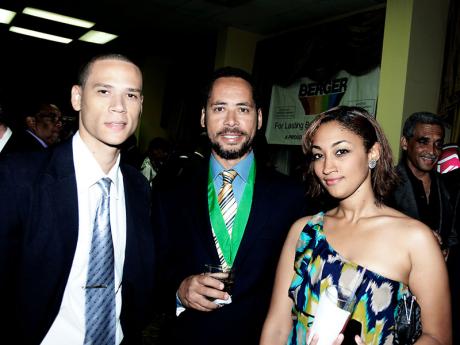 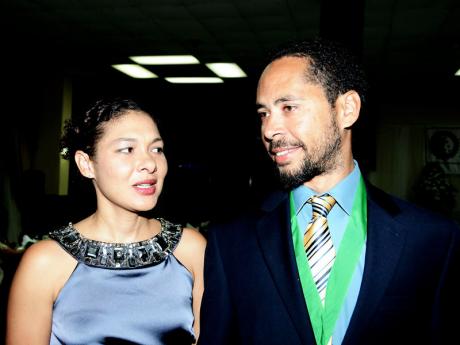 Christopher Whyms-Stone and his wife, Nicola. 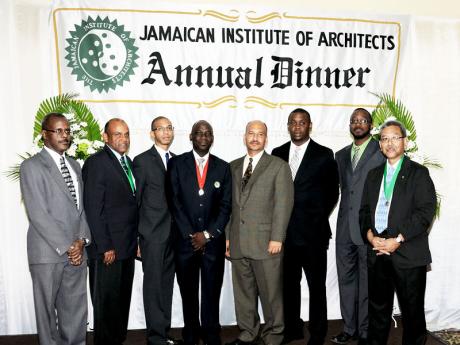 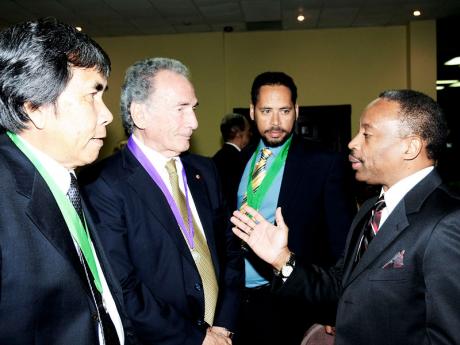 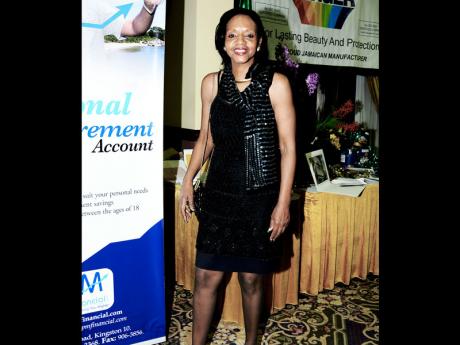 As you enter the room, you can immediately tell it's a lot more special than other years. It's the same people - the Jamaica Institute of Architects (JIA) - it's their annual dinner, but this year, the ambience leaves no doubt that the JIA is proud of its contribution to nation building, as Jamaica celebrates its 50th anniversary of Independence.

From the decor to the wall mounted displays, the tables bearing sponsors' merchandise, to the large screen showing images of magnificent edifices designed by its members, Saturday, April 21 was a very special annual dinner for the JIA family. All this was happening at on the 18th floor the Wyndham Kingston hotel.

The evening's programme was superbly executed by director of ceremonies, architect Robert Woodstock whose witticisms kept the audience entertained throughout. Milton Samuda, president of the Jamaica Chamber of Commerce, was the guest speaker and he focused on 'Jamaican Architects Role in National Development - Past, Present and Future ... What's Next?'

Laurie Ferron is the current president of the JIA and in his report, he told guests that they had achieved all but one of the five major objectives they set last year. That one was developing student membership in the JIA.

Ferron said it had been a challenging but productive year, during which an energetic approach in dealing with issues confronting the profession had been developed. He also said that more workshops, seminars and webinars would be done, including in rural Jamaica, as a way of bringing value to architecture to the membership and demonstrate the advantage of membership in the JIA.

"The JIA has lobbied for the statutory registration of architects which was passed in 1987. The organisation is currently lobbying for enforcement through the architects registration board and actively participating in discussions to implement a new building code," Ferron said.

The list of past presidents of he JIE since 1962, reads like a who's who of the industry and includes: the late Bill Hodges, Denny Repole, Bert Robinson, Vayden McMorris and Peter Soares. Also in the list are: Rivi Gardner Errol Alberga, Douglas Wright, Marvin Goodman, Christopher Lue, Desmond Hayle, Robert Woodstock, Douglas Stiebel, Clifon Yap, David Kay, Louise McLeod and Christopher Whyms-Stone.

Members of the public can visit: www.arb.com.jm for a list of the available registered architects in Jamaica.

DID YOU KNOW THAT:

Rivi Gardner is the architect behind the rendering of the new Audi Centre Kingston now under construction and the building that now houses Guardian Life?

Michael Gyles is the man behind the National Commercial Bank's Atrium, Marvin Goodman is the brains behind the fabulous Jencare Skin Farm complex along Hope Road?

Are you aware that among the structures designed by local architects since we gained Independence in 1962 are the Ministry of Education, Victoria Mutual Building Society headquarters, the Scotiabank tower, downtown Kingston, and the J.Wray & Nephew complex along Spanish Town Road?