A 'hallelujah' party for centenarian 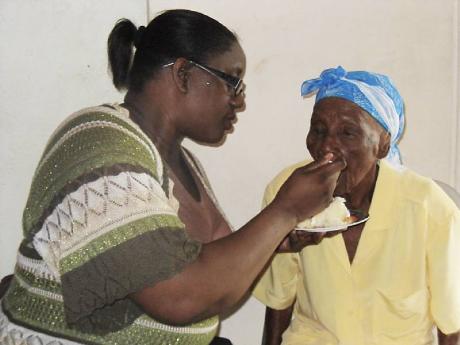 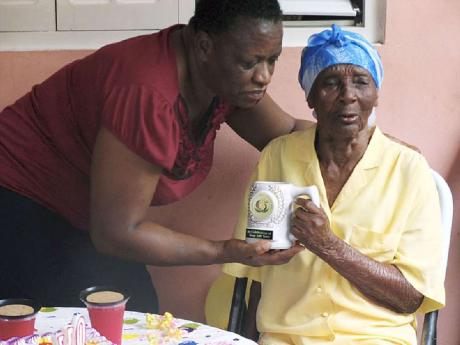 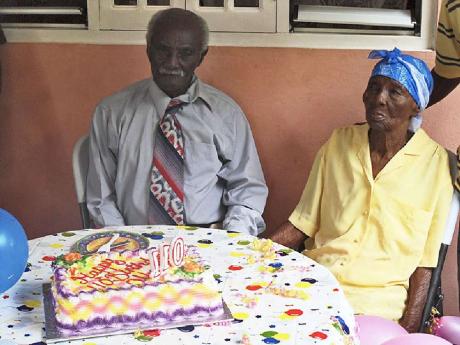 DESPITE HER fading health, Alberta Heath of Succaba Pen in Old Harbour, St Catherine, mustered up the strength to listen keenly and react with intermittent shouts of "Hallelujah!" in acknowledgement of the love and affection showered on her at her 110th birthday party.

The party, hosted by the Burke Road Senior Citizens' Club, was the brainchild of Annesta Ellis, secretary. It was held at her residence in Old Harbour on April 27, three days after her birthday.

"Mrs Heath is the oldest person I ever knew, and I said it would be really, really great to have a function to honour her and let Jamaica know that we have someone as special as her in our lives. So we sought the help of the business community to have the party," Ellis told The Gleaner.

And it was OJ Coolers; Dr Lushus; Dr Olando Thomas of the Wellness Healthcare Centre; Scott's Stockpile and Construction Limited; My Neighbourhood Supermarket; Old Harbour Meats; Owen Parker - justice of the peace; and Garnett Thomas, who answered the call for assistance.

Also, the Kanscious Vybes band, led by manager Courtney Linton provided free entertainment, to the delight of those in attendance, who danced and rocked to the excellent, set, which included a suite of Gregory Issac tunes.

"It takes a long time to get to 110 when counting. She is a very special lady," Squire said.

Annmarie Martin also gave the birthday girl a gift basket courtesy of Solid Care Pharmacy, while her son, 65-year-old Donald Wallace, expressed his love for her with a special token. Her two grandsons, Redelo and Frankey, showered her with kind words.

Former councillor, Old Harbour South division, Hilda Johnson, and member of Old Harbour Bay Seventh-day Adventist Church, met the senior in 1976. She hailed her as an extraordinary Christian who has an impeccable memory.

"She had a beautiful contralto voice and she knows the words of any song you can think of and ask her to sing. Sister Heath used to do missionary work. We used to go out to street meetings and visit the shut-ins as well," Johnson reflected.

Heath, who lost her sight more than five years ago, married Oswald, 26 years her junior, on September 14, 1967.

The couple hailed from Parottee, Black River, St Elizabeth, but relo-cated to Old Harbour Bay in the 1970s. Fourteen years ago, they resettled at their present home in Succaba Pen.