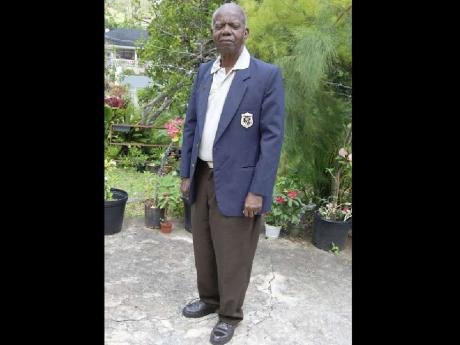 The outstanding educator Caswell Lloyd Burton, decked out in his Mico College blazer. 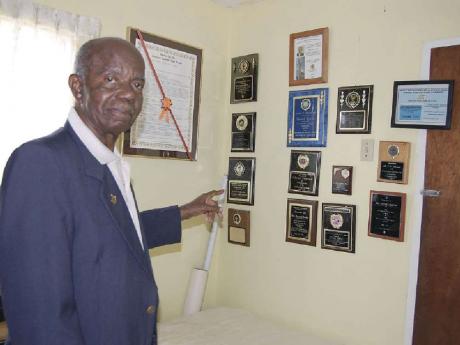 Caswell Burton shows some of the awards that he has received during his time in the education sector.
1
2

CASWELL LLOYD Burton is a name that will be etched in the history of Jamaica's education system having devoted his life to teaching, nurturing, and shaping the characters of young minds for more than 40 years.

Burton was born and raised in the quiet rural district of South Hampton in St Elizabeth, situated approximately four miles from the town of Santa Cruz.

His spirituality is evident when speaking to him. "I am convinced that I was called by God to the teaching profession. God directed and had me nurtured and equipped for job," Burton told The Gleaner.

He attended the Mount Osborn Elementary School where he showed remarkable academic ability. Remembering those early days like it was just yesterday, even at 81 years old, Burton recounted: "We were well-grounded academically, especially in mathematics and English."

He was successful in the Jamaica Local Exam, and after working for a short period, enrolled in Mico College.

"I did a short stint teaching at my former school, Mount Osborn. The headmaster at the time told me I was cut out to be a teacher, so she got an application form for Mico, and that was that," Burton related.

Burton attended Mico from 1960-63 and majored in history and geography. At the same time, he found true love and married his wife of 51 years, Durcy, who is also an educator.

After leaving college, he worked in Kingston at St George's College for a while, but later moved to St Thomas. He explained: "I was encouraged by the older heads to go rural, get a school, and launch out. So I went to St Thomas and became the headmaster for Middleton Elementary, which is situated on the hillside overlooking Morant Bay."

With ambitions to further his studies, he went to the University of the West Indies (UWI) where he studied geography, history, and economics. "We were the guinea pigs in the geography department - the first geography group that included Dr Omar Davies (minister of transport and works)," Burton said.

On completing his studies at the UWI, Burton was seconded by the Ministry of Education at Yallahs Secondary as principal.

In 1969, he was appointed principal of the first junior secondary school in Manchester, the newly built Bellefield, Junior Secondary. While at Bellefield, Burton received a scholarship to do a course in educational administration and management in Edinburgh, Scotland.

On returning to Bellefield, he was asked again by the Ministry of Education to take charge of another newly built school, Spalding Junior Secondary, on a temporary basis.

He was later seconded as headmaster to Rusea's High in Hanover in 1975. At Rusea's, he was given the responsibility of overseeing the amalgamation of Rusea's High and Hanover Secondary, which was completed in 1981.

Manchester High had a vacant post in 1982. He applied and was successful and served as the school's headmaster until 1991.

Following a brief stint in life insurance, Burton ended his journey as an educator after serving at York Castle High. He continues to serve in the education arena as the chairman of McIntosh Primary. He is also an ordained minister of the Methodist Church.