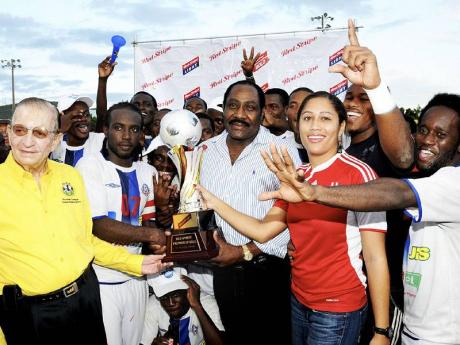 Portmore United yesterday breathed a sigh of relief as they secured the 2011-2012 Red Stripe Premier League after playing to a 1-1 draw with Waterhouse in their football match at Ferdie Neita Park.

Boys' Town, the only other team entering yesterday's final round with a chance of winning the title, stormed home to a 3-0 win over Humble Lion to finish a point behind the winners.

Needing just a point to win, Portmore United were off to a fast start, taking the lead in the third minute through forward Adoah Nickle.

However, they saw their lead wiped out just 15 minutes later when Damarley Samuels fired home for Waterhouse.

The leaders showed all the nerves one would expect, especially with news that Boys' Town were giving a fine time at Effortville filtering into the ground.

Portmore United should have got home more comfortably, but good goalkeeping and unwillingness to take responsibility and a missed penalty made their job harder.

When Alanzo Adlam was fouled late in the second half, most players seemed unwilling to take the penalty, save for Andrew Vanzie who watched as Richard McCallum dived correctly and turned it around the post.

In another bizarre miss, Adlam and Nickle played a game of dodge-the-responsibility as they passed to each other under very little pressure inside the 18-yard box with McCallum at their mercy, until Nickle screwed his shot wide.

While it was not the most beautiful display, coach Calvin Lewis was thankful.

"Yes, it is done and it is always good when you do it at home," a pleased Lewis said.

"We wanted to close it out as early as possible but we gave up a goal, got a clear-cut chance and missed a penalty. But I must commend the players for the way they performed today," added Lewis, who said he was always confident that his players would have done the job.

Focused on game at hand

Lewis said that while news was coming in about Boys' Town's exploits, he was never concerned about them.

"I was never interested in Boys' Town's score. I was more concentrated on what we were doing here. I knew that once we were in front or even, we did not have to worry about what was happening there. I kept telling the players not to concern themselves with what was happening there. We only had to take care of our business and we would be good," explained Lewis, who saw his team let the opportunity to claim the title slip in their three previous games when they failed to record a win or draw.

"It is really an overwhelming feeling, to be honest.

"Things were not going our way in the last part and we had to dig deep because it was largely a young set of guys who had not won before and the belief instilled in us and the hard work that we put in paid off in the end and we are thankful," said the former Glenmuir daCosta Cup player.

"Congratulations are due to Portmore. If there is one team that deserves to win the League, that is Portmore. When we needed to beat Portmore, we did not beat them and when it matters most, throughout the rounds, they were most consistent and they did the job today. So hats off to them," said the former national Under-20 coach, who also had a stint as coach of Portmore United.

The game, Duckie said, was an important one for his team.

"It was an important game for us, especially as it relates to the integrity of the League. I think Boys' Town set the tone and hats off to them. They went down there and did what they had to do and we came here and wanted to win the game, but it just did not happen for us," he lamented.

With the win, Portmore's fifth, they collected the Red Stripe Premier League Trophy and $2.5 million in prize money.