Tifa and The Teddybears? 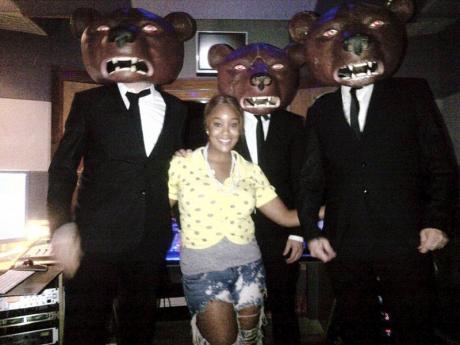 Tifa hangs out with the Teddybears at Big Yard Studios recently. - Contributed

The track was produced by the Teddybears and recorded at the famed Big Yard studios in Kingston.

Tifa is quite pleased with the outcome of the track and pointed out that this is just one of a number of high-profile collaborations that she has done in recent times.

"In the past couple of months, I have worked with DJ Toddla T from the UK [United Kingdom] and Dre Skull. I have a few more collaborations coming up with international artistes, so look out for that," Tifa hinted.

The Teddybears began as a five-member outfit in 1991. The group is known for mixing pop, rock, hip hip, electronic, reggae, and punk, among other genres.

The band members started to wear large bear masks in album art and promotional photographs some time after 2006. before that, they appeared in concerts and photos without disguises.

The group released its debut album, You Are Teddybears, in 1993 and its second album, I Can't Believe It's Teddybears, STHLM, followed in 1996. A third album, Rock 'n' Roll Highschool, came out in 2000 and consisted of electronic elements, which were a departure from the band's previous hard-core sound.

A fourth album, Fresh, was released in 2005 and included the singles Cobrastyle, with Jamaican dancehall artiste Mad Cobra, and Hey Boy.

Cobrastyle is featured on the soundtrack of the FIFA 2006 and Forza Motorsport 2 video games. It was also used in the ending credits of the film Employee of the Month and WWE's Summerslam 2006 as the official theme song for the event. It was featured prominently in the pilot episode of NBC's 2007 comedy show Chuck as well. It peaked at number 10 on the Swedish Singles chart.

The group is signed to Atlantic Records and released Devil's Music in 2010.