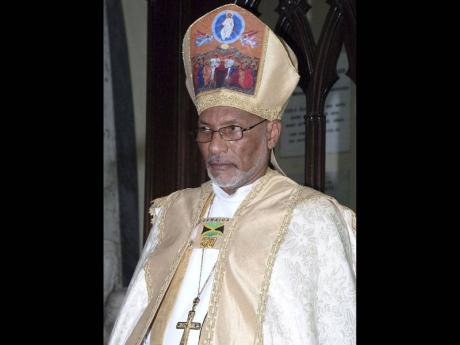 Newly installed Anglican Bishop of Jamaica and the Cayman Islands, the Right Reverend Dr Howard Gregory, is urging the church to dissociate itself from tainted money, which continues to circulate in the society where corruption is rampant.

Gregory said yesterday that members of the church could not consider themselves exempt from corrupt activities if they were either caught up in or benefiting from the act.

He was speaking to a packed Cathedral Church of St Jago de la Vega in Spanish Town, St Catherine, after he was enthroned as the 14th bishop of the diocese.

"I warn the church that the rally card and some of the fund-raising activities need to be subjected to closer scrutiny as they run the risk of bringing drug and other tainted money into the coffers of the church," he declared.

"Likewise, while the church seeks to minister to the spiritual needs of all people, we must be careful how we bend over backward to charge fees and to accommodate some funerals that are bashment affairs funded by money of dubious origin," he added in a stirring homily that elicited periodic cries of amen as signs of approval from the congregation.

Gregory added that there was a terrible breakdown in society where persons' values and morality were concerned, but Christians should strive to make a difference in society.

"We live in a society which is permeated at every level by corruption, and in which we benefit cooperatively from ill-gotten gain and not just the acts of corruption, supposedly restricted to politicians and those in the public service," Gregory said.

"For example, the inflows into the country from the lotto scam have wide circulation within the economy and there is not only a culture of silence around it among some persons, but there are many who would suggest that there is nothing wrong with it."

The bishop also said there were contemporary challenges to which the church must respond in carrying out its duties in a Christian community.

Alluding to the increase in child abuse, Gregory said the church must become a serious advocate for the cause of the nation's children and use its existing network of congregations to educate and actively sponsor programmes geared towards prevention and rehabilitation of victims.

"We need to develop within our congregations greater sensitivity to the needs of the children and young people who we currently have within our fellowship as a start," he said. "Too many congregations have young persons who are at significant points of transition in their development and in their educational pursuits and no one bothers to ask how they are doing, what they are seeking to accomplish in life, and how the individual members of the church may be of assistance to them."

One member of the congregation, Denton Maxwell, told The Gleaner that the lack of transparency in relation to donations was an area of concern.

"As people of God, we should know exactly what we are involved in or what we are doing and so I believe that Rev Gregory is correct," Maxwell said.

"It might not be widespread problem but it is happening. Sometimes you don't know where the donations are coming from and we have to ensure what we are doing and what we are involved in is pure."

The 61-year-old Gregory, who has served 38 years in the priesthood, received his new appointment after a vacancy was created with the retirement of the Rt Rev Alfred Reid on December 31 last year.