Move to instil 'Values and Attitudes' in children 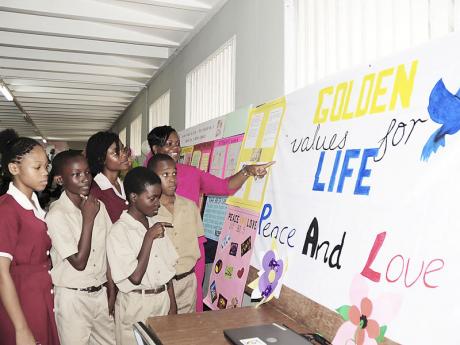 Sheca Windett, guidance counsellor at Herbert Morrison Technical High School in St James, is amused by one of the banners on display at the Ministry of Education's Region Four Values and Attitudes launch at Irwin Primary School in the parish.-Photo by Sheena Gayle 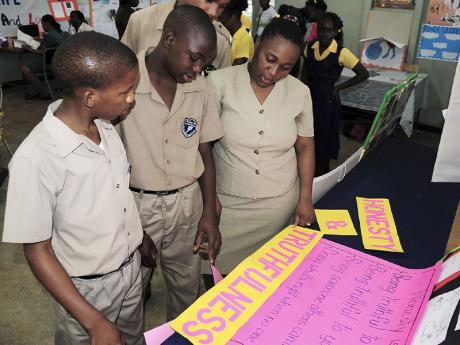 Flowrene Keith (right) of Bogue Primary School in Montego Bay talks to some of her male students during the Ministry of Education's Region Four Values and Attitudes launch at Irwin Primary School.
1
2

WESTERN BUREAU:The Values and Attitudes campaign by the Ministry of Education has embraced a new approach that involves parents in a bid to tackle social ills in schools across Jamaica.

"The target groups for this year are children who are displaying behavioural problems and the parents of those students. The initiative was always for the primary schools, but the new one includes parents, junior high, and high schools," said education officer Lisetha Adams.

She was speaking at the launch of the programme for the Ministry of Education's Region Four at the Irwin Primary School in Montego Bay on Monday.

Operating under the theme 'Golden Values for Life .... For a Better Me for a Better You and for a Better Jamaica', the Values and Attitudes campaign looks at five core values: respect, national pride, discipline, peace, and honesty.

slow but sure progress

"You might not see it immediately in the children, but we are still trying to instil the proper values and attitudes," she said, responding to queries as to whether the programme was gaining traction in the schools.

"Although we were not doing the programme externally for the past three years, when it gets to this time of the year, schools take on the programme internally."

Former prime minister, P.J. Patterson, had launched the Values and Attitudes Programme for primary schools in 2006. Since then, the Ministry of Education's Region Four Guidance and Counselling Unit has embarked on an annual initiative to instil ethics and manners in primary-level institutions across the region.

According to Adams, most of the murals in primary and secondary schools are influenced by the Values and Attitudes Programme, which is a step in ensuring that the message is constantly promoted.

"Just as how you would teach mathematics, English, and the sciences, we have to teach values and attitudes. You have to keep on reminding students of the need to practise it."