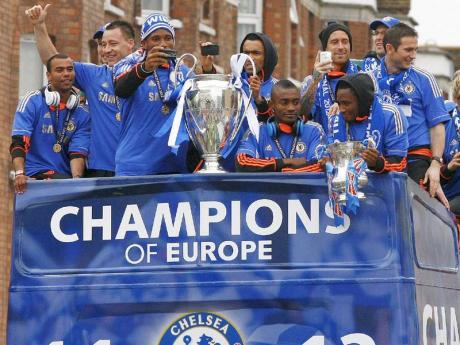 In front of tens of thousands of Chelsea fans, the new kings of Europe paraded the Champions League trophy through London's New King's Road yesterday.

The Blues are the capital's first European champions after beating Bayern Munich 4-3 in Saturday's shoot-out in the competition's 57th season.

Even Chelsea's notoriously reclusive owner, Russian oligarch Roman Abramovich, joined his expensively assembled squad on an open-top bus to show off the trophy as fans crowded into the streets around Stamford Bridge.

Winning the Champions League has been Abramovich's key objective since buying Chelsea in 2003 and starting to pump more than $1 billion and rising into the club.

"We have been here a long time waiting to win this thing," midfielder Frank Lampard roared to fans from the bus. "And it was the most amazing night in all of our careers. We are just so pleased to come back here and celebrate with all our fans."

The Blues went straight to their ground in west London from the airport after celebrating through the night in Munich, where they overcame Bayern's home advantage with incredible resolve.

Despite Drogba conceding a penalty in extra time, Arjen Robben's effort was saved and the game was settled by a shoot-out when the Ivory Coast striker clinched Chelsea's victory.

But it might have been 34-year-old Drogba's last act in a Chelsea shirt, with his contract expiring next month.

"Didier Drogba we want you to stay," Terry chanted over a microphone from the open-top bus with Abramovich listening.

There is also uncertainty about the future of interim manager Roberto Di Matteo, who has delivered the European Cup and FA Cup in barely two months since replacing the fired Andre Villas-Boas.