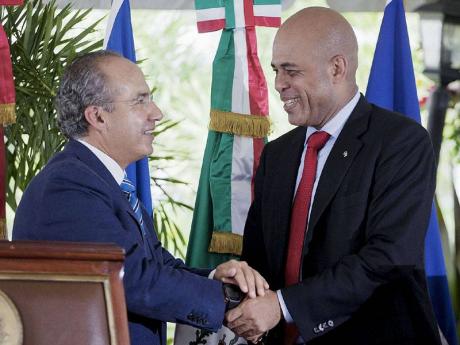 Mexican President Felipe Calderon yesterday assured his Caribbean Community counterparts they can count on Mexico to represent the region's interests when he hosts the leaders of the world's richest nations, the Group of 20, next month.

"The Caribbean nations can count on Mexico as a friend and partner who will represent them actively and proudly in the G20 because we are also and I will underscore this are a part of the Caribbean region," Calderon told the leaders of the 15-nation regional bloc in their second joint summit with Mexico at the Barbados Hilton, just outside, the capital, Bridgetown.

CARICOM leaders have pressed Calderon to support CARICOM's position that calls for reform of the international financial institutions, the International Monetary Fund and the World Bank, when Mexico, the current chair of the G20, hosts its summit on June 18 and 19.

Calderon said it was significant that Mexico, a developing nation, currently holds the presidency of the G20. He said Mexico has an ambitious agenda for development and stressed that his country intends to incorporate the opinions of all countries on the agenda but, in particular, developing nations such as CARICOM member states.

Host Prime Minister Freundel Stuart repeated CARICOM's call on Mexico to use its influence as chair of the G20, which controls 80 per cent of world trade, to represent the interests of the Caribbean and other small island developing states.