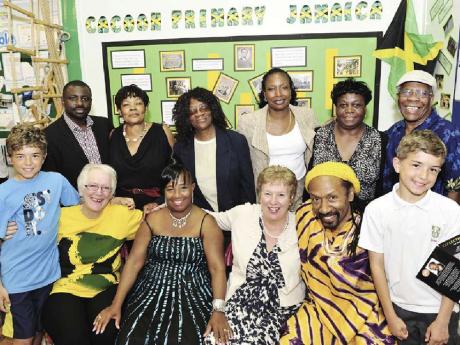 IN JAMAICA'S golden Olympic year, a special bond is growing between a Hanover school and youngsters 5,000 miles away in Wolverhampton, England.

Children at Cacoon All-Age School in Dias, Hanover, are getting to know pupils at Uplands Primary School in Finchfield, Wolverhampton, now that the head teachers of both schools have visited each other.

Carol Grant, principal of Cacoon All-Age, was guest of honour at Uplands on May 22, where staff, parents, and pupils put on a special Caribbean welcome for her with food, music, and entertainment.

Three months earlier, Uplands head teacher, Lesley Ward, made her first trip to Cacoon and enjoyed a warm welcome from staff and the 185 pupils there.

Grant, who made her first trip to the United Kingdom for a nine-day visit, said: "Pupils and staff here are making me feel really at home. They have been so welcoming."

And guests at the welcome party were delighted that Grant had brought something very special with her - the Caribbean sunshine!

Uplands head, Lesley Ward, said: "We have been planning these exchange visits for the best part of two years, and we're so pleased that in both this Olympic year and Jamaica's 50th anniversary celebrations, we have been able to forge this friendship.

"When we first spoke to each other, we knew we were on the same wavelength and could work together.

"I was very humbled at the warmth of the welcome I received in February, and we hope we can build strong bonds between the two schools for our pupils to learn about each other's lives and culture in the years to come."

Both schools are working on a book of poetry on the theme 'Building Bridges.' They are being assisted by poet and creative artist Yasus Afari, who lives in Mandeville, Jamaica, and has visited pupils at both schools.

The exchange was organised with support from the British Council's Global Schools Partnership. Both schools have also had support from Liz Millman, an experienced teacher and longtime friend of Jamaica, who set up and developed the charity Jamaica 2000 just before the millennium to encourage educational links between the two countries. She has also launched a UK-wide schools link-up project called Widening Horizons.

By coincidence, Uplands School has other links with Cacoon as two of its pupils, twins Jake and Ben Taylor, are Grant's cousins. Wolverhampton is also the UK home of many Jamaicans with roots in Hanover, including Merrise Crooks-Bishton, a fellow guest at the welcome party, who added: "Our links with Hanover are many and varied, so we feel that fate has stepped in. These links were meant to be."