Dom Rep elections and CARICOM: Chance for a reset 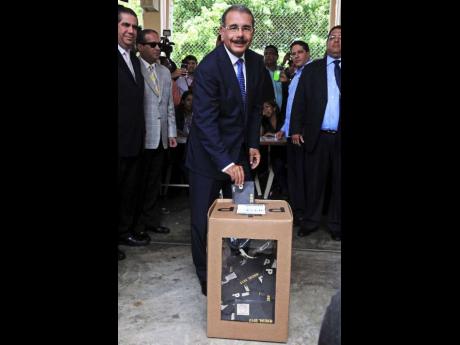 This means that the outcome of the May 20 presidential election in the Dominican Republic has largely gone unremarked by much of the CARICOM media.

Despite the country being one of the region's most populous nations with 10.2 million people, a member of Cariforum and sharing the island of Hispaniola with Haiti, you would be hard pressed to discover more than the absolute minimum about the election's outcome, what it might mean for the English-speaking part of the region or how it may modify the thinking of others towards the region on issues from security to investment.

The winner, of course, was Danilo Medina, the candidate of the ruling Partido de Liberacion Dominicana (PLD). In August he will succeed Leonel Fernandez who has been president since 2004. His wife, Margarita Cedeño de Fernández, a lawyer and political figure in her own right, is vice-president-elect.

There were allegations from the defeated party about voting irregularities, but for the most part external observers declared themselves satisfied with the process. According to the final formal election bulletin, the PLD and its allies took 2.32 million votes or 51.2 per cent of the total cast, and the PRD and its allies got 2.13 million votes or 46.95 per cent.

Hipolito Meija, the leader of the principal opposition party, the Partido Revolucionario Dominicano, took time to accept the PLD's victory but eventually did so by proclaiming himself leader of the opposition, reflecting perhaps concern that some in his party now want a change of leadership.

Although the vote might seem to reflect the acceptance of the status quo, what the Dominican electorate wanted from whoever won was change, particularly in the social area.

There was also a desire among the Republic's growing middle class for greater probity by those in politics, the military and the police.

What this means is that President-elect Medina will need to set his own style of government and demonstrate quickly that he can deliver.

In this, he will not be able to ignore the popular appeal of his vice president, her husband's probable desire to run again in 2016 and the challenge of financing the ambitious social programme he has proposed. He will also have high on his agenda relations with Haiti and hopefully, recent worrying developments in relation to security and the apparent arrival of Mexican narcotics cartels in the country.

The PLD's programme is socially ambitious. It commits it to spend 4 per cent of GDP on education, provide full school days for students, including breakfast and lunch; take 1.5 million Dominicans out of poverty during its term; incorporate around 1.4 million Dominicans into family-health insurance; and improve the public-health system to provide quality care at low or no cost. It also places significant emphasis on tourism as a means to stimulate rapid growth.

This election was set apart from those before by the colossal sums spent on media advertising and the use of new media. So much so that there is a sense among some Dominicans that as in the US, future campaigns may come to respond to the candidate who is able to raise the largest amount in campaign funds.

The 2016 election will, in any case, be different as it will for the first time bring presidential, congressional and municipal elections together and bring to an end the present state of near permanent political campaigning that exists in the Dominican Republic.

One new innovation in this election that the anglophone Caribbean might monitor was that 0.3 million Dominicans abroad were registered to vote in three regions.

They did so in North America, Miami and Latin America, and Europe, and from these new 'districts' elected seven overseas deputies to the Dominican Congress.

The election of a new president suggests that this is a good moment for Caricom and the Dominican Republic to consider again how best to deepen relations, not least because rates of growth in the Dominican Republic are forecast at 4.5 per cent for this year and its business community is looking for investment and trade opportunity in the region and further afield.

Relations between the Dominican Republic and Caricom have been poor for a long time now. Although the region's technical elite have worked closely on trade negotiations and related issues, progress on the better integration of Dominican Republic with CARICOM has not happened, and there has been no significant trade other than with Trinidad.

Unfortunately, there remain mutual suspicions, personal animosities and a sense that the relationship is on hold despite the many common concerns and interests that the Dominican Republic and its neighbours share.

There are many reasons why the nations of CARICOM and the Dominican Republic ought to work more closely together. They range from a common interest in seeing Haiti's recovery; through exploring the growing interest of some forward looking Dominican conglomerates investing more in the nations of CARICOM; to the need for closer co-operation on security and counter narcotics issues; and making the Economic Partnership Agreement with Europe or other trade arrangements work.

There is also a trend towards the Dominican Republic becoming a much greater focus for partners outside the region.

One small but significant sign of this was that one of the very few bilateral meetings that took place at the UK Caribbean Forum in Grenada was between the British and Dominican Republic foreign ministers.

This is part resulted in the announcement that the two nations were negotiating a co-operation agreement, something that exists with only one other Caribbean nation, Cuba, but for different reasons.

Although relations with the nations of Caricom, other than Haiti, are unlikely to be high on the new President's agenda, the Presidential election offers an opportunity to improve the dialogue. This needs to happen both at a regional level and bilaterally.

How best to achieve this is challenging, but one way forward might be for an appropriate senior political figure or institution in Caricom to begin to involve the outgoing president in a dialogue that tries to identify the practical steps that might be taken to resolve present difficulties.