'Daddy Stew' has petrol in his veins 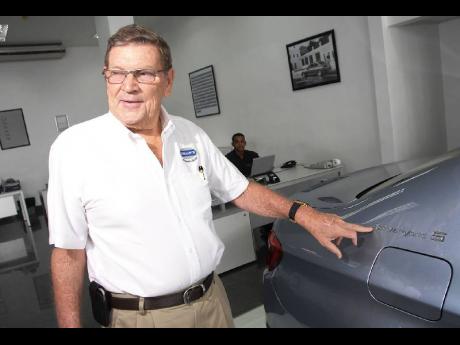 MANY Rally Jamaica enthusiasts will remember when Suzuki took the first five top spots in Rally Jamaica and Richard 'Daddy Stew' Stewart took everything his Suzuki Cultus could give with pedal-to-metal flat out driving.

Trying to hold a wide-ranging conversation or to change the topic will fail miserably when it comes to Stewart because it will always come back to cars.

You won't be wrong if you think he has petrol running through his veins. He readily agrees, especially in reference to his stint at Diamler Motors in England.

"Yeah, yeah they pretty much did that (gasolene for blood transfusion) while I was there ... they took great care of me," he remembers, with a laugh.

That time he refers to was when his father, Lionel, had a dream of transforming a reputable auto supplies and repairs outfit into a successful dealership. That process started in 1952 and Richard joined the party in 1960.

"I learnt a lot at Diamler and later with the Rootes people, working alongside people like David Hobbs (noted British racer, Le Mans, Indy Car & Formula One driver) and I used that experience here with the company," he said.

That experience would come in handy as Stewart ardently pursued his love for rallying. In fact, he points that passion as the reason for the introduction of Suzuki into Jamaica.

"We saw the little SJ410 operating in the hills of Jamaica when the Japanese gave them as a gift to the coffee industry and they were running like forever, then we saw them down in Rally Barbados and we thought that they'd be very good for Jamaica and that's where it all began."

Stewart is not your average company chairman who limits his involvement to board meetings and other high-level issues. He is very hands-on. At rallies, he is very much part of the crew now that he is no longer competing.

"It's part of the competitive spirit it brings out the best in us."

And Stewart doesn't shy away from making a sales pitch about one of the several marquees in the Stewart Motors stable. He rattles them off: "We have Suzuki, Mitsubishi, and BMW as a stand-alone on the car side, then we have Komatsu and Bobcat along with Mitsubishi Fuso and Freightliner for mining, construction and trucks."

He does not stop there. "We're glad to have brought Suzuki to Jamaica over the last 30 years."

"In fact, at one time we were selling the most Suzukis anywhere and the Vitara is still the top-selling SUV."

At this point, Stewart manages a satisfied snicker that can only come from a man who is on top of his game.

The inescapable question is how Stewart got to this point. Much has been said about the early days and the dreams of a father fulfilled by a tenacious son who stuck to the script. How is he now talking about marquees previously held by significant other players?

"Well, the opportunities came up and we took advantage of them." He dismisses the question with a shrug of the shoulders and a shake of the head. He almost made it sound like one of the many split-second decisions a rally driver may make as he bonds with his machine to conquer the ever-changing terrain.

Stewart doesn't miss a beat on the question of the difficulties in the motor-vehicle industry over the years.

"We've had to deal with all the difficulties from import restrictions to trade licences to suppliers credit ... but we had to adjust to the economic reality ... . When it called for it, we just put an affordable car on the market ... getting the best deal for Jamaica, put it out there and keep plugging and plugging and move from strength to strength."

Stewart immediately deflects any suggestion of the Stewart Motors empire being the product of one man's driving ambition, strategic acumen or singularity of purpose.

"We have a team here, we have our different roles and we rely on each other to get the job done. We keep in close contact."

On the question of the inherent dangers of a close-knit family business, Stewart is positive.

"It's very rewarding, has its challenges but it's good. We have frequent meetings, lunch together; all those things that help us work together. Then our management team, they have their units to run, they have their targets and they work at them," he said.

Stewart is getting ready for the future. "The experts say we're gonna come down to about five or six companies manufacturing cars by 2025. I want to have us ready for that," he says as he slaps the side of the 3 Series BMW that we had been standing in front of during the entire interview.