Sts Peter and Paul's Davis to shine at prep champs 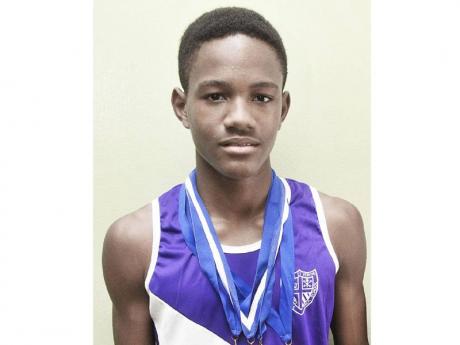 Sts Peter and Paul's Chadon Davis is expected to be one of the top athletes at this weekend's prep schools championships. - Rudolph Brown/Photographer

Sts Peter and Paul's record-breaking athlete, Chadon Davis, is expected to be one of the stars of this year's staging of the three-day Jamaica Independent Schools Association/ CapriSun Prep School Track and Field Championships, which will be held at the National Stadium from May 31 to June 2.

The 12-year-old Davis, who is scheduled to compete in the 200 and 400 metres, high jump and 4x200m relay, is the firm favourite in all three of his individual events.

He has personal best times of 25.25 in the 200m and 56.57 in the 400m. Davis was in spectacular form at the recently held Ardenne Classics. He broke the 400m and high jump records, respectively.

The versatile Davis, who is also the captain of his school's football team, broke the high jump record at the Covenant Over Distance development track meet, this after he had earlier won the 300m and 500m races at the meet.

"I think that I can win the high jump, 200m and 400m because I am very strong in these events," Davis told the The Gleaner.

"I was injured last year and so I am looking to make up for that by winning all my events at this year's championships," he said. Davis is expected to receive strong competition from Hydel's Gaise Foster in the 200m and 400m events.

He added that he has been working very hard in training for his events because he is aware that his main rivals will be very focused when the championships come around.

"I have been running faster times at the development meets than my other competitors and so this makes me very confident going into prep champs," said Davis, who is an admirer of national 400m record holder Jermaine Gonzales.

"I would like to become the champion boy at prep champs because this would be a dream come true for me," he said.

Sts Peter and Paul got 22 points for 15th position in last year's championships but Davis expects a top-10 finish for his school at this year's meet.

"I think that team can finish in the top 10 at the championships because we have been working hard in training to accomplish this," the young athlete said.